How did y'all pay for YOUR football cards? 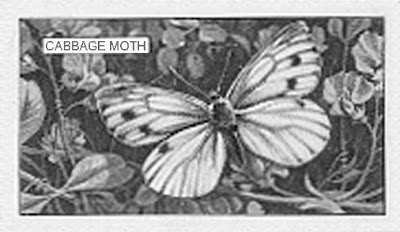 I don't know whether it was due to global warming or to the freakishly cold, dry summer we had here in northcentral Wisconsin. (I so love the irony of that.) I just know that driving home after work at this time of year, the fields should be full of the little black-speckled moths, but that there aren't any.

I also know that if this had happened 50 years ago, it would have put a major dent in my football card buying.

Back in the late 1950s and very early 1960s when I was a pre-teen living in Fond du Lac, Wis., the arrival of the cabbage moths in the fields on the western end of the city and the arrival of the year's first football cards on the shelves of the mom-and-pop grocery stores in the neighborhood coincided with the beginning of the school year.

By that time the card collectors in my neighborhood -- that meant just about everyone, except girls and queers -- were pretty much done with baseball cards for the year (except for the all-star cards in the high-number series), and unless there was a particularly cool or gory non-sports set such as Space, Mars Attacks or Civil War News, all of our attention was turned to football cards.

For a number of those years, I financed my football card purchases with cabbage moths. It wasn't a direct batrer system, you understand, there was a middle man.

At that time and place, the western edge of the city was defined by the multi-lane Highway 41 that ran north and south between the Michigan border and (or so we were told, but never really believed) Miami, Fla. Between the last street in our neighborhood and Hwy. 41 was a stretch of prarie-like fields and the "West Side Ditch." The Ditch was a wide man-made gully, perhaps 15 feet across at the top and narrowing to three or four feet at the bottom. It was there to direct the occasional heavy rainfall or winter ice melt from the storm sewer system to Lake Winnebago.

We didn't think much about why the moths were there in the early autumn, we just knew that they WERE there and that just a couple of blocks away, there was a guy who would pay cash for them . . . cash that could be converted into football cards.

If I ever knew the moth man's name, I've long since forgotten it, or blocked it from my memory. All the kids in the neighborhood knew his house, though, and that he paid a penny apiece for cabbage moths. White or yellow, it didn't matter, and he wasn't too picky about whether they were alive or dead. We never knew for sure what he did with the moths he bought. It was rumored that he was a science professor at the college in Oshkosh, so maybe he used them as lab specimens or in research.

The guy also paid a nickel apiece for frogs, but they were the bounty of the older kids, and if one of them caught us with more than one frog in our possession within a couple of blocks of the Ditch, we were subject to the Indian grass torture or a hinder-binder, and the loss of our frogs.

For kids our age, in that time, a penny apiece for cabbage moths was good money. On a Saturday afternoon you could easily net 20-30 of them in an hour or so, and that translated to a thick stack of wax packs.

While it seemed like easy money, chasing the moths up and down the slopes of the Ditch must have been harder work than I remember. When I'd take my mason jar of moths to the "professor's" house, he'd always invite me in for a glass of his special punch.

I recall that the punch tasted a good deal like normal Hawaiian Punch, but there was some sort of thicker, sweeter taste there that I could never identify, but which sometimes springs to mind even today when I'm enjoying a fruity cocktail.

I'd drink the punch while he counted the flittering moths through the glass of the jar. I always had a pretty good idea how many moths I'd brought, and he never tried to short me on the payment. If anything, he seemed to always round up to the nearest nickel.

After a little while, the moth-chasing and the warmth of his sun-drenched living room (even with the shades drawn) frequently compelled me to stretch out on the couch and lay my head on a pillow.

Those must not have been particularly restful naps, though. I must have tossed and turned a lot. I recall that frequently I'd wake up with my t-shirt on backwards or inside-out and . . . wait! . . . what?
Posted by Bob Lemke at 1:53 PM