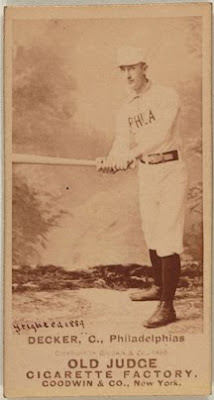 One of the more interesting players to be found among the 500 or so in the Old Judge tobacco card series of 1887-1890 is Harry Decker. He not only played four seasons of major league ball and was immortalized on a baseball card, but he was also an inventor and a felon.

Decker was born in Lockport, Ill., in 1864. His given name was Earle Harry Decker, but in the course of his lifetim, he was known to have adopted several aliases, making the tracking of his life outside of baseball impossible.

He began playing pro ball with Evansville as a teenager in 1884, before Indianapolis, then in the major league American Association, signed him later that season. After just a handful of games with the Hoosiers, he joined a second short-lived major league, the Union Association, with the Kansas City Cowboys.

Though the UA folded after just one season, Decker remained with the Kansas City team in the Western League for 1885.

He opened the 1886 season with Macon, then it was back to the bigs, with both Detroit, then Washington, of the National League. He was not a strong enough hitter to stick in the majors, even as a second- (or third- ) string catcher and utilityman, so he played the 1887-1888 campaigns with Toronto in the International Association.

Decker was again called to major league service in 1889 with Philadelphia, but was released in late July. He caught on with the Phillies again to start the 1890 season, then was sold in June to the Pittsburgh Alleghenys, with whom he batted .274 and hit all five of his major league home runs.

Decker's last known gig in professional baseball was in 1891 with the New Haven Nutmegs of the Eastern Association.

He next pops up publicly in 1904, when he filed for a patent on a catcher's mitt. According to Decker's application, "My invention relates to certain new and useful improvements in base-ball gloves, and has more particular reference to that type known as 'catchers' mitts.'

"The primary object of my improvement," Decker claimed, "is to provide a glove which is thumbless and, further, one in which the padding can be adjusted or regulated to suit the user."
The specifics of Decker's glove can be seen by searching on his name in a Google Patent Search, for, indeed, Decker was granted U.S. patent number 812921 in February, 1906.

Somewhere along the road, Decker fell into a life of crime, and in the 1910s his home was in San Quentin prison in California, where he was serving time under the name Earl Henry Davenport.
An item in the March 7, 1915, Sporting Life by an unnamed writer mentioned Decker, "The star base ball team of San Quentin prison, to which the Venice and Los Angeles teams sent uniforms last season, has sent Manager Hogan [of the L.A. Angels] an autographed photo of their team.

"They are led by a player who calls himself Davenport, but who is E.H. Decker, who is said to have been a catcher for the Detroit team years ago. When the writer knew him he was catching for the Keokuk, Iowa, team, and was a good man in the field in his position."

According to baseball historian Peter Morris, who is active in the SABR Biographical Committee, Decker was released from San Quentin in 1915, but can be traced no further due to a "very long career of crime" and the many aliases he used. The committee would like to be able to attached a date and place of death to Decker's records.

Decker appears on no fewer than five different poses in the Old Judge cigarette cards, all with Philadelphia. His cards are priced as "commons," but like many Old Judge cards, finding a specific player in the hobby market at any one time can be a challenge. 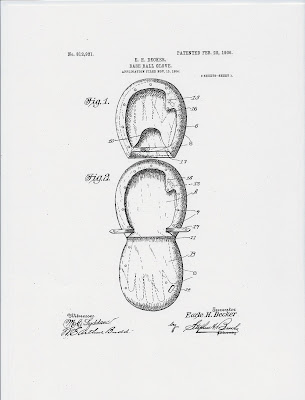