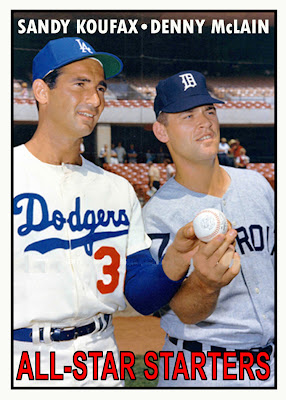 By 1967 I was no longer buying or collecting baseball cards. I was 16 years old and my time and money were being misspent elsewhere.

Thus it's not surprising that I have done only a single 1967-style baseball card -- my Red Sox Rockers card -- in my custom creation career . . . until now.

Most of my work on custom cards in the past couple of months has been in football cards; this being football season, after all.

I decided to take a baseball break, however, when I found a really exciting photo of Sandy Koufax and Denny McLain comparing notes prior to their facing off in the 1966 All-Star Game. Just one look at the photo and I knew it could be turned into a really great multi-player feature card.
A good thing about such cards in the 1967 format is that there is plenty of room on the back to tell the story. 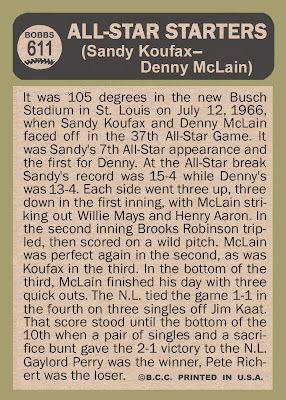 As I worked on this card it occurred to me that there was yet another custom card to be gleaned from the photo. I think you can guess what that was. Tune in tomorrow for the result.
Posted by Bob Lemke at 2:48 PM