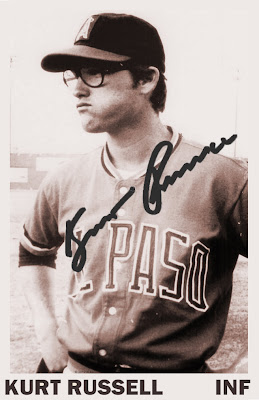 I'm a fan of Kurt Russell's movie and TV work. He's shown great acting range in more than 50 years on the big and small screen. One of my favorites is his role as Wyatt Earp in the 1993 Tombstone.

While he hasn't had any major baseball-related roles, his friend Ron Shelton (himself a former minor leaguer, 1967-71) is said to have written the role of Crash Davis in the 1988 movie Bull Durham for Russell. The studio insisted on Kevin Costner for the role, however.

Kurt Russell spent his early 20s shuttling between Hollywood and the Pacific Northwest as he tried to decide whether he was an actor or a ballplayer . . . or a little of each.

Russell had been signed to a 10-year contract by Walt Disney's studio in 1960 when he had a part in the Elvis Presley movie, It Happened at the World's Fair. He worked regularly in TV and movies for the next decade, but when that contract expired, he decided to give professional baseball a try.

He signed with the California Angels and spent most of three seasons in the short-season Northwest League.
He was a second baseman on the Bend Rainbows in 1971, at the age of 20. He played in 51 games, the most he would play in any one season. For Bend he batted .285 with one home run, though he had 11 doubles.

For the 1972 season he remained in the Northwest League, with Walla Walla, part of the San Diego Padres organization. In 29 games he hit .325 with no power.

He was back on the Angels' NWL team in Portland to start the 1973 season, in the process of being converted to an outfielder. he batted .299, again with little power, in 23 games before being called up to the Angels' AA team, the El Paso Sun Kings of the Texas League.

He played in just six games at El Paso, back at second base, batting .563 when an injury to his throwing shoulder effectively ended his hopes of a career in pro ball. (Though he did make a token at-bat with Portland in 1977, when the team was operating independently, with 38-year-old Jim Bouton as their pitching star.attraction.)

The totality of Kurt Russell minor league career consisted of 110 games over four seasons. His career average was .292 and he had two home runs (one each in 1971 and 1973). The lower minor leagues didn't keep great stats in those days, so I don't know what his fielding was like. 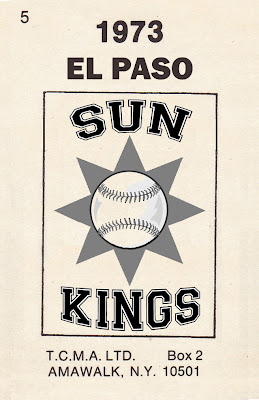 It's too bad that Kurt Russell's minor league career preceded the heyday of minor league baseball card issue. TCMA was only in its second year of what would be some 15 years of team-set production in 1973, and had not yet expanded its reach into the Northwest League. Few minor league teams in 1973 were doing their own locally sponsored sets. The Standard Catalog of Minor League Baseball Cards shows TCMA only set in '73 was for the Cedar Rapids Astros, while local entrepreneurs sponsored sets for the Sherbrooke Pirates, Syracuse Chiefs, Tacoma Twins, Three Rivers Eagles and Wichita Aeros.

All of those early Seventies minor league sets were quite crude compared to the work that would follow by Mike Cramer, ProCards, Best, Classic and even Fleer and Upper Deck in the 1990s.

When I found a picture on the internet of Kurt Russell in the uniform of the El Paso Sun Kings, I decided to invest a few hours in creating a fantasy Kurt Russell TCMA card. I had to improvise a bit for the team logo on the card back, as I could not find a contemporary rendering of the logo, and had to work from the uniform on a photo of uncertain vintage.

The facsimile autograph was lifted from a later photograph, so I don't know how closely it resembles what he would have signed in the early 1970s.