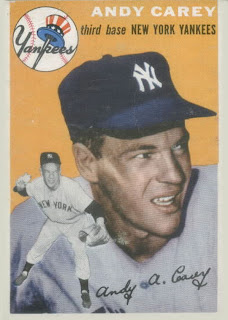 Andy Carey was one of the least-heralded regulars in the Yankees' dynasty of the 1950s. He was a solid, rather than spectacular, major leaguer, holding down third base from his debut as a 20-year-old rookie in 1952 until New York "farmed him out" to the Kansas City A's in 1960.

During the 1951-52 off-season, after signing a $65,000 contract with the N.Y. Yankees, rookie infielder Andy Carey received at his home a package from the team. It was a gray flannel uniform for Carey to use in his winter workouts before joining the team at spring training. In the era, Yankees' manager Casey Stengel, who lived in Glendale, Calif., used to conduct pre-spring training workouts out there for rookies, rehabilitating players and those who might be considered for a position change. Try getting the players' union to agree to that today!

The name tag on the jersey read, “Joe DiMaggio.” (Most likely, the tag simply read “DiMaggio,” but let’s not let the minutiae of early 1950s Yankee uniform tagging detract from a good story.)

In the April 9, 1952 issue of The Sporting News, Curley Grieve, a San Francisco baseball writer, picked up the story in a sidebar headlined, “DiMag’s Suit Was Yankees’ Sign of Confidence in Andy”.

“Joe’s old uniform—for me!”, Grieve quoted Carey (almost as if he had been there himself). “Gosh—I wish I could put it in a glass case and keep it. I’m the proudest guy in the world.” Carey obviously had a baseball memorabilia collector’s instinct.

Grieve continued, “The Yanks do nothing by accident. When they sent that treasured suit to Carey, it meant even more than Manager Casey Stengel’s oft-repeated statement; ‘We’re counting on Andy Carey.’”

The reporter noted that when Carey graduated from high school, after being named to several important prep all-star teams, he turned down a bonus offer of $6,500, played college ball for a year and a half, then received ten times that sum.

Introducing Carey to his readers, Grieve reported, “Andy doesn’t smoke, drink or keep late hours. A reporter called Carey’s home one evening and learned he was in bed. It was 9 o’clock.

“Andy’s financial windfall has in no way gone to his head,” Grieve continued. “He drives a Ford, dresses informally, hunts and fishes for a hobby and, in his spare time, finds pleasure in building himself a hydroplane at .”

Addressing a concern that was significant to all of baseball, from ownership to the fans during the height of the Korean War, Grieve reported, “The new pride of the Yankees has been classified 4-F in the draft. He has a back condition that was first discovered when he injured himself sliding at St. Mary’s College. After X-rays, doctors said there was cartilage missing in his lower spine and the vertebrae are not properly joined to the pelvic bone.

“In cold weather, his back tightens up a little and even once in a while he can feel pain in the hot weather. 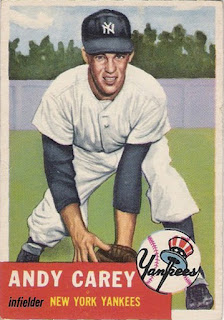 “But it’s not serious enough to hurt my batting or fielding,” Carey was quoted.

Carey had batted .288 with 14 home runs for Kansas City, the Yankees' American Association farm club, in 1951. Stengel was looking for him to help solidify an iffy infield for 1952. Billy Martin had broken his ankle in the off-season. He had pretty much nailed down the second base job for 1952, but the injury forced the Yankees to consider shifting Gil McDougald to the keystone spot. Bobby Brown, who had platooned with McDougald at third in '51, was awaiting induction into the Army, though he wasn't actually called up until early July.

As it turned out, McDougald did start the season at third base.

When Carey made his big league debut on May 2, any magic that may have been in DiMaggio's jersey didn't appear to have rubbed off on him over the winter. In his first game he committed two errors in four chances and was 0-for-4 at the plate. In his first five games at 3B, he hit only .176, with no extra-base hits. The Yankees, however, won all five games.

Carey was sent back to Kansas City, to develop his batting eye and to work out at shortstop. He hit .284 with 16 home runs with the Blues before he was called back to New York on Aug. 2.

His second stint with the Yankees went even worse. He was 0-for-16 in six games over the first half of August.

He was farmed out again, this time to Syracuse in the International League. Where he hit a modest .255 with two homers.

The Yankees called Carey back up at the end of the season for three games. He went 3-for-7, raising his rookie season batting average to .150 with no extra-base hits and a single RBI.

In the 1953 season, Carey solidified himself as the Yankees' regular third baseman for the remainder of the 1950s.

Carey died last December at the age of 80. I wonder if he ever got that DiMaggio jersey into a glass case up on his wall?