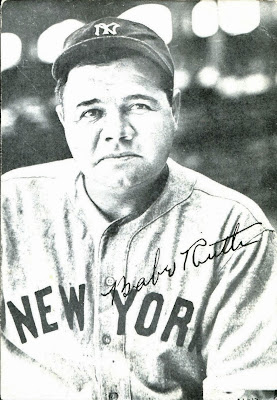 Accounts gleaned from 1947 issues of The Sporting News have shed new light on a Babe Ruth card that has for many years been cataloged as a 1948 issue; we now know that it was issued in 1947 (and possibly reissued in 1948 in a slightly modified version).

The tribute card is black-and-white, 3-7/8" x 5-7/8" with a borderless chest-up portrait of Ruth in a road uniform and a facsimile autograph. On back is a voluminous statistical summary of his career (though, curiously, it omits mention of his 1935 season with the Brooklyn Dodgers), along with career highlights and a few bits of biographical data.

The line at the top of the card: "George Herman Ruth, a mighty man was he," and a line near the bottom "Glory ad infinitum," suggested to some (myself included when I first added the card to the Standard Catalog of Baseball Cards many years ago) that the card may have been issued shortly after Ruth's death in August, 1948. The lack of a date of death on the card, however, was puzzling if it was indeed a postmortem issue. 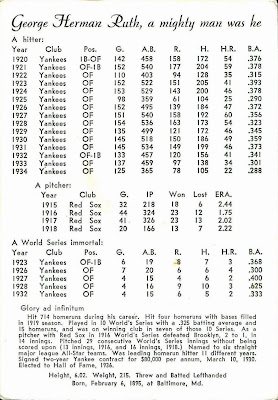 This card was listed in the catalog as "1948 American Association Babe Ruth" on the basis of a line of type at the very bottom on back, "Compliments of the American Association of Professional Baseball Clubs." The listing mentioned a second version without the AA attribution.

In TSN we find that Sunday, April 27, 1947, was “Babe Ruth Day” around the major and minor leagues. A pre-game program at Yankee Stadium was broadcast live or by recording at ballparks all over the country.

The American Association, a Midwestern circuit of Class AAA minor league teams, was no exception.

The April 2 issue of The Sporting News reported, “In each of the four A.A. parks (Toledo, Louisville, St. Paul and Kansas City) on that date, spectators will be given a free autographed picture of Ruth, with the reverse side of the memento showing the Bambino’s complete diamond record.”

TSN’s box scores for those games didn’t include attendance figures, but accounts in the paper mentioned there were 12,351 at st. Paul and 13,872 at Kansas City. With those numbers to go by, it would be reasonable to assume that something on the order of 50,000 of the Ruth tribute cards might have been on hand for distribution. Whether or not they were all given out to fans attending the games, or distributed later in some fashion is unknown.

In Tokyo and Osaka, Japanese professional baseball also celebrated Babe Ruth Day on April 27. Ruth had been extremely popular with baseball fans there ever since his appearance with an all-star baseball tour in 1931. According to TSN, prizes awarded to spectators at those games included pictures of Ruth. (No doubt some of those Japanese souvenirs survive within the hobby today, though I don’t recall any such pictures that have been specifically linked to the event.) 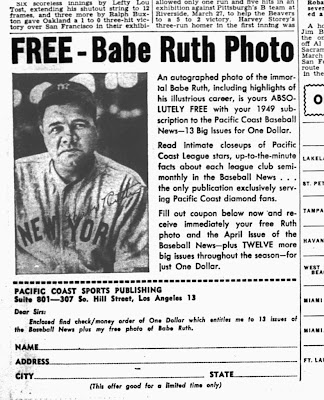 As early as September, 1948, and continuing into the 1949 pre-season, the Ruth card -- minus the American Association notation -- was advertised in  the Pacific Coast Baseball News as a premium with the purchase for $1 of an annual 13-issue subscription to the semi-monthly magazine issued during the baseball season; alternatively, the publisher offered the card alone for a dime in other ads. Similar ads were run at the same time in The Sporting News.

The card, in either version, probably has a current market value of $75-250, depending on condition.

Unfortunately, the listing was dropped from the Standard Catalog after the 2011 edition when attempts were made to switch data bases from which the book was compiled. If it ever reappears, it should be as a 1947 issue.