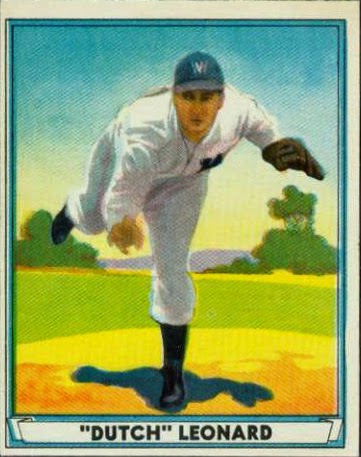 In 1942, Washington Senators pitcher Emil "Dutch" Leonard broke his ankle in his second game of the season, April 23.

On Sept. 5 he faced the visiting N.Y. Yankees for the first time since his return to action.

As they emerged from the dugout before the game, each of the Yankees greeted Leonard, asking "How's the ankle, Dutch?" All declared they were glad his rehabilitation was coming along all right.

Then the first seven Yankees to come to the plate bunted on him.

Leonard lost the game 6-2, giving up five hits. I don't have the play-by-play, so I don't know how many of those hits may have been on bunts.

UPDATE: It turns out that The Sporting News account was not really correct. A regular reader of the blog sent this . . .

According to the 9/6/42 N.Y. Times, the first inning against Dutch and his ankle went like this:

"Hassett started by outgalloping a bunt. Red Rolfe popped out, but Selkirk walked and when DiMaggio laced a single to center, Hassett dashed home. Keller fanned, but Gordon and Bill Dickey weighed in with lusty singles, each hit driving in a run, and Rizzuto sent the fourth tally home by upending the Washington inner defense with another bunt. Curiously, Leonard pitched a whale of a game after that. He allowed the Yanks no more hits..."