In tribute, I'm going to reprint the four blog postings I made since 2012 concerning my Thurston custom cards. I'll present them in the order in which they originally were posted. 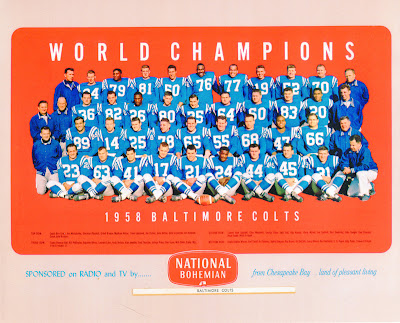 It was only a couple of years ago that I learned that 1960s Packer lineman Fuzzy Thurston had actually begun his NFL career as part of the World's Champion 1958 Baltimore Colts.

Since Thurston only appeared on two mainstream football cards, 1962 and 1963 Topps, and a 1962 Post cereal card, I thought it would be neat to create a custom card of Thurston as a Colt in the 1958 Topps format.

I scoured all the usual resources for a picture of Thurston as a Colt and came up empty until I discovered he was included in a team photo premium issued in 1959 by the Colts' radio-TV sponsor National Bohemian beer.

Originals of that premium picture are rare and costly. I thought I'd found a solution when I saw an 8 x 10 reproduction offered on eBay. I bought the repro and stuck it in my "futures" file.

When I recently completed by first 1958-style football custom (Dave Hanner, presented in my blog on Jan. 18), I decided the time was now to work on the '58 Thurston.

I dug out the photo, scanned it . . . and was greatly disappointed when the quality of the image proved totally unacceptable. Thurston's image on the team photo is about 3/4" square. Because my photo was a picture of a picture, when enlarged to about 2", the player scan was, well, fuzzy.

Perhaps some day I'll have access to one of the original National Bohemian premiums, which are larger (though I don't know the actual size) and may yield a more usable scan.

I did find a nice college photo of Thurston with Valparaiso, so I guess I'll work on a 1955 All-American card. Watch this space for the result. 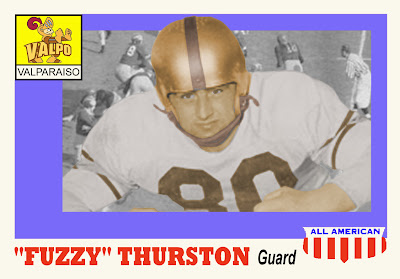 As I posted on Saturday, I had long intended to create a 1958 Topps-style football card of Fuzzy Thurston with the Baltimore Colts. A lack of a suitable foil has sidelined that effort, but since I did find a decent picture of Thurston during his college days, I've gone ahead and created a '55 All-American custom.

In researching Thurston, I was surprised to find he didn't play college football until he was a junior at Valparaiso University in 1954. He had been recruited to Valpo as a basketball player. During and after his NFL career, Thurston continued to be a fixture on the Green Bay Packers charity basketball squads.

With the Crusaders in 1954, when they won the Heartland Collegiate Conference in 1954, Thurston was named an AP "Little All-American." As team captain in 1955, he repeated as a Little All-American and was named the HCC Most Valuable Lineman. In his two years at Valpo, the team was 17-7-2.

Thurston was a fifth round pick (#54 overall) of the Philadelphia Eagles in the 1956 NFL draft,but never played for them. He spent two years in military service before joining the Baltimore Colts in 1958. His play during the last four games of the stretch drive helped the Colts to a World's Championship.

Just three days into the Colts' training camp in 1959, Thurston was traded to the Green Bay Packers for linebacker Marv Matuszak. New head coach Vince Lombardi wanted Fuzzy to anchor the offensive line which was integral to the "run to daylight" offense he brought to the Packers' dynasty of the 1960s.

In my next posting, I'll tell you about the time I "met" Fuzzy Thurston. 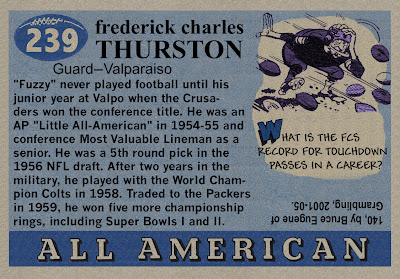 From Jan. 27, 2012
My two most recent blogs have detailed my attempts to create custom cards of Lombardi-dynasty Green Bay Packers great Fuzzy Thurston.

I actually met Thurston one night . . . sort of.

It must have been about 1971, when Thurston was about 38 years old. I was in college then, and working for a company that traveled around the state of Wisconsin taking physical inventory at supermarkets and other retail stores.

Our crew was headquartered out of Fond du Lac, where I was born and raised. At the edge of town was the "Left Guard," a supper club that was one of a handful Thurston owned along with teammate Max McGee.

One night after we had finished work, our crew stopped at the Left Guard for a drink. There were four or five of us in the car, which was driven by Bill, whose last name I no longer recall. Bill, at that time, really needed to be a "Friend of Bill." It's sobering (no pun intended) to think of all the miles we drove back then with Bill behind the wheel in various states of intoxication.

It was rather late on a weeknight when we entered the bar area of the restaurant. Besides the bartender, I don't recall seeing anybody else in the place . . . except for Fuzzy Thurston.

Thurston was sitting on a stool at the far end of the bar, with his stocking feet propped up on the bar.

After a few minutes, and probably into his second drink, Bill looked over, caught Thurston's eye, and said, "Jesus, you're a sloppy son of a bitch"

That night I witnessed what was usually reserved for opposing NFL linemen, Fuzzy Thurston in action.

He came off his stool like a shot, grabbed Bill by the collar and belt and gave him the classic bum's rush out of the place, using Bill's head to open two sets of doors.

Thurston came back in, and resumed his place at the end of the bar while we filed out without a word, helped Bill back behind the wheel and drove back to the nearby mall where we had parked our cars.

Come to think of it, and I may be misremembering because this happened 40 years ago, one of us may have said to Fuzzy as we were leaving, "Thanks for not killing him." 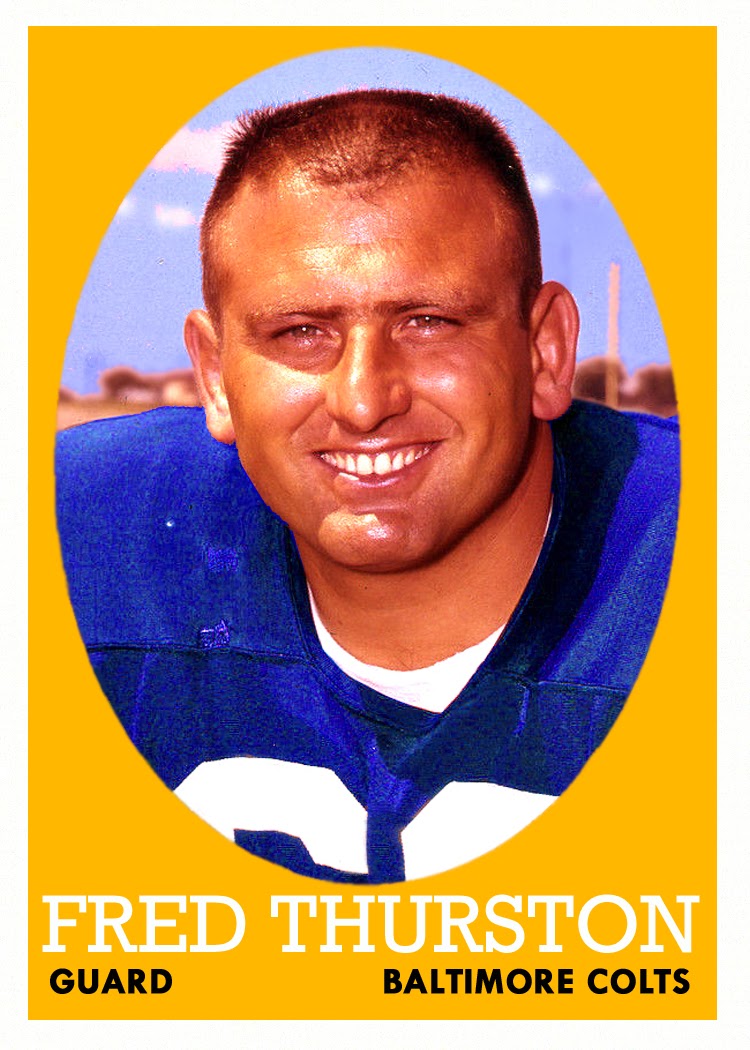 If you'll go back to my blog posting of two years ago (Jan. 27, 2012), you'll see why I have an interest in creating custom cards of Green Bay Packers great Fuzzy Thurston.

The recent sale of several photos of Thurston from the Topps Vault has allowed me to finally create that '58 Colts card . . . along with a 1960-style custom that "predates" Thurston's actual Topps rookie card by two years. Actually, my '58 Colts card required a bit of creative license on my part, the original photo showed Thurston in a Packers uniform, but when cropped to the format of the '58s, I was easily able to colorize the jersey to Baltimore blue.

I believe the completion of these two new custom cards will satisfy my desire to enhance Thurston's football card legacy. 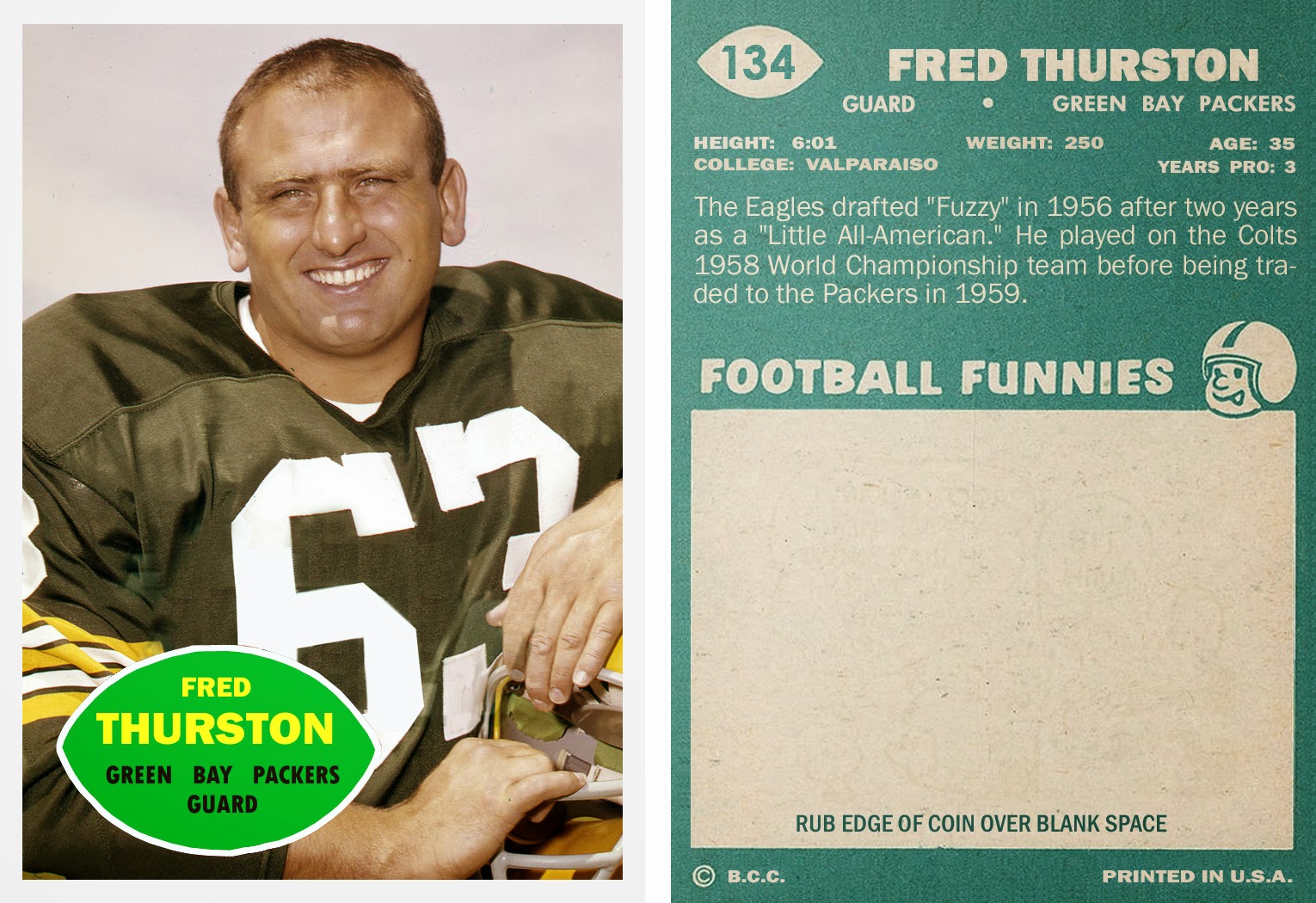 *  *  *
Since I posted that last Thurston-related blog just about a year ago, I found a couple of more really nice original Topps photos of Thurston that I've filed away for possible future use in creating one or two more 1960s style Fuzzy Thurston custom cards.

The world is a ess colorful place without Fuzzy Thurston.