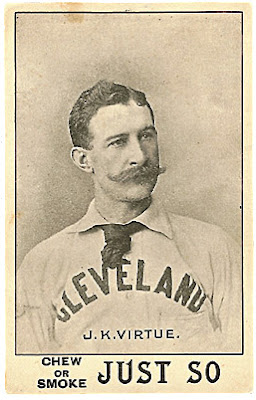 Jake (Jacob Kitchline) Virtue was but a footnote figure in 19th Century professional baseball history. When he suffered a stroke at age 29, he'd played nine years in pro ball.

Virtue was born March 2, 1865 in Philadelphia. He played there with the Somersets in 1883-1884. In 1885 he played with the Lancaster Ironsides (Eastern League). He joined the ranks within the structure of Organized Baseball with Altoona and Lancaster (1886) and Altoona, Canton and Oswego in 1887. He remained with Canton for 1888 before being brought up by the Detroit International League club for 1889.

The Detroit club had dropped out of the National League after the 1888 season.

He hit .314 with Detroit in 1889. He received a salary of $325 a month with the Wolverines, pretty good pay for a professional baseball player at the time. In those days, many clubs carried as few as 13 players: four pitchers, two catchers, four infielders and three outfielders.

As the 1889 season was drawing to a close, Detroit needed to win only one of its remaining three games to win the pennant.

Virtue broke a finger in practice, but because he was Detroit’s only first baseman, and batting over .300, he had to stick it out. Detroit won the IL pennant. Because his finger was never properly set, it remained crooked for the remainder of his life.

Virtue returned to Detroit for 1890. The International League folded on July 7, with Detroit atop the standings. Virtue signed with Cleveland of the National League.

He played first base for the Spiders through the 1894 season, batting .274 in his five-year major league career.

That winter he suffered a stroke that paralyzed his entire left side. At the age of 29 he was rendered what The Sporting News characterized as a “helpless cripple.”

Though he played pro ball during the first great baseball card-issuing days of the 1880s-1890s, Virtue appears on only one known card . . . and you probably couldn’t afford it even if you could find it.

He is one of 16 Cleveland Spiders in the ultra-rare Just So tobacco card issue of 1893.