Browsing around the lot. No. 1

I'm going to present them, from time to time, in trivia compilations. When a former colleague of mine did similar columns, he called it "browsing around the lot." hence my title.

The other night I was watching – believe it or not for the first time – the 1961 movie Breakfast at Tiffany’s, when I noticed in one Manhattan street scene a dark green box van in the background with “Rogers Peet / Makers of Fine Clothes” painted on the side.

At spring training with the Dodgers in on March 26, 1949, Sam Jethroe was unofficially clocked at 6.1 seconds in the 60-yard dash. That time tied the world’s record, and he had done it in full uniform and baseball spikes.

By comparison, Rickey Henderson ran the 60 in 6.4 seconds.

The current record for the outdoor 60-yard dash seems to be 5.99 sec.

While playing with in the Kansas-Oklahoma-Missouri League in 1949, Mickey Mantle hit an inside-the-park home run on Aug. 28 when his long fly ball hit the outfielder on the top of the head, knocking him unconscious.

The hapless fielder was Bill Hornsby, son of Rogers Hornsby. The younger Hornsby played five seasons of minor league ball, virtually all of it in Class C and D leagues.

In 1962 Cincinnati Reds pitcher Bill Henry became the first full-time pitcher to pitch in more games (40) than innings pitched (37.1). The lefty relief pitcher was 4-2 that season.

Today, of course, in the era of specialty set-up men and closers, such a ratio is common. 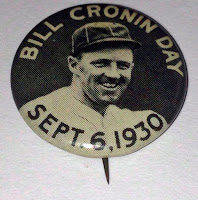 To start the 1949 season, the Leavenworth Braves (Class C, Western Association) lost what was believed to have been an Organized Baseball record of 22 straight games.

On July 19 of the same year, they topped that with a second major losing streak of 23 games.

Not surprisingly, other than manager Bill Cronin, there were no former or future major leaguers on the team. That was the last team to represent in Organized Baseball.

Larry Doby, who integrated the American League with the Cleveland Indians in 1947, is also credited with integrating the American Basketball League.

On Dec. 30, 1947, he signed a contract with his hometown Paterson (N.J.) Crescents (sometimes called the Panthers). The team finished second in the league that season.

Among the most common of the 1887-1890 Old Judge cigarette cards are those of Arthur Irwin. He can be found on at least 13 different photo/team variations.

Irwin is credited by some with inventing the infielder’s glove.

He played, managed and coached in the major and minor leagues from 1880 through 1921.

On July 16, 1921, while on the S.S. Calvin Austin en route from to he fell, jumped or was pushed overboard. His body was never recovered.

Ben Chapman, was a four-time All-Star, had a World’s Series ring, was once banned from Organized Baseball for a year for slugging an umpire and is often accused of being the loudest and most bigoted of Jackie Robinson’s detractors in 1947.

He was also an ambidextrous bowler. In 1945-46 he had a 180 average bowling right-handed and a 165 average as a leftie. Chapman owned a bowling center (they were called bowling allies back then) in Montgomery, Ala. 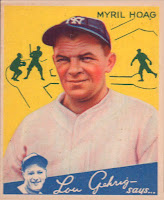 Myril Hoag had unimaginably small feet for a ballplayer. Despite standing 5’11” and weighing 180 lbs., he was reported by some sources to have worn a size 4 shoe on his right foot, 4-1/2 on the left. A photo in the Aug. 3, 1944, Sporting News showed Hoag comparing shoe sizes with a teammate and said Hoag wore a 5-1/2 or his right foot and 4-1/2 on his left.

During his big season with Sacramento in the Pacific Coast League in 1930, when he hit .337 with 17 homeruns, he was being scouted by many major league teams. One remarked, “How can you tell your club to pay $35,000 for a guy wearing a lady’s size shoe?”

The Yankees took a chance and in 1931 Hoag began a 13-year career in the American League.