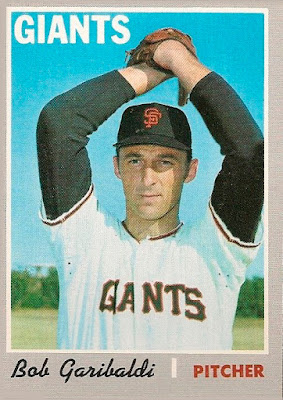 The article by Bob Stevens in the July 28, 1962 issue of The Sporting News didn’t record any great moment of baseball history, but it appealed to me as being especially well-written in describing something every boy my age dreamed of, his big-league debut.

I’ll just sit back and share Stevens’ work with you . . .

‘Scared’ Garibaldi Shows Mets’
150-Gee Polish in Major Debut
ON ROAD WITH GIANTS  Only a few hours after Bob Garibaldi became eligible to pitch, July 15, in New York’s famed Polo Grounds, the Giants’ $150,000 bonus player took the long walk from the bull pen to the hill.
He got the job done—three Mets up, three Mets down on 11 pitches.
It was, at 20, the former Santa Clara Bronco’s introduction to the pressure cooker of the majors. Two weeks earlier, he was piloting a Pepsi-Cola truck around his native Stockton, Calif. He had weighed the fabulous offers of nine big league clubs, two of which went higher than the Giants.
For personal reasons he elected not to sign his contract, although terms were agreed upon many days earlier, until July 15.
Was a star born that day in the humid Polo Grounds, the graveyard of the timid pitcher? It sure could be that it happened, because the Bronco sophomore and history major took to work with him not only talent wrapped in a 6-5, 205-pound frame, but poise and courage and intelligence.
‘Scared, But Glad It Happened’
“I was scared,” he said after his debut. “I was scared particularly while I was making that long walk from the bull pen. I felt so all alone. I really didn’t to pitch this soon, but I’m glad it happened.”
But Bob didn’t have much time to reflect upon the success he had in retiring, in order, Rod Kanehl, Elio Chicon and Chris Cannizzaro. For he was at it again the very next night, this time with the game entirely in his hands.
With one run in, two out, last of the ninth and the Giants leading only by 3 to 2, Manager Alvin Dark lifted Stu Miller and waved Garibaldi in from the bull pen.
The pressure could not have been greater, the situation more perilous.
But with the thunderous roars of 23,280 fans crashing against his ears, Garibaldi one-pitched the Giants to victory for his first “save.”
During his slow walk to the mound the crowd reacted kindly. However, when two of his warm-up pitches crashed against the backstop, cruel cat-calls cascaded from the stands. Bob heard them, but he didn’t let them know it. He was busy. He signaled to Plate Umpire Chris Pelekoudas that he was ready, leaned down to squeeze the resin bag, glanced at Richie Ashburn, dancing off first base, and at Chacon at third base. He took his stretch.
·         *   *   *
Sailing Fast Ball Over the Plate
Kanehl, the first major leaguer he had retired the day before, crouched over at the plate. Rod knew the kid would try with everything he had to get the first pitch over. And he did. A sailing fast ball, in on Kanehl a little, about belt high. Kanehl swung under it and the ball sailed softy to Willie Mays.
Willie later gave the ball to Garibaldi, Bob’s first trophy, but you can bet not his last.
Asked why he had decided on the fast ball, Garibaldi smiled and said, “Tom Haller called for it and Haller is a great catcher. I’m not about the shake him off.”
In retiring the first four major leaguers he faced, Bob threw a fast ball, curve and slider, with a couple of the fast balls coming side-arm.
“The important thing,” said Dark, “is that he got them over the plate and with something on them. I like him. I even like the way he wears his cap.”
“He has poise,” said Pitching Coach Larry Jansen, “and he’s not afraid.”
“I was still scared,” reiterated this modest young man of infinite talent, tremendous honesty and amazing maturity.

Like so many other bonus babies of the 1940s-60s, Bob Garibaldi's career didn't match the hype or justify the amount of bonus received. The $150,000 bonus that Garibaldi was reported to have received was half-again as much as the salary of baseball top two stars, Mantle and Mays.

Garibaldi appeared in nine games, all in relief, for the 1962 Giants. His team got the losing end in all but one of those games. He pitched 12.1 innings, giving up 13 hits, seven runs and five walks, with an ERA of 5.11. He struck out nine.

From 1963-70 Garibaldi spent most of his time with the Giants' AAA teams in the Pacific Coast League. He got into four games with the parent team in 1963, and pitched in one game each season in 1966 and 1969. He never got a big-league win. 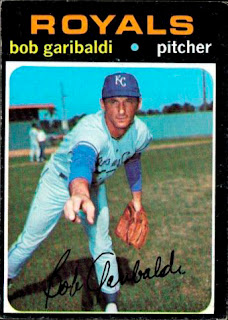 After the 1970 season, when he had a career-high 15 wins, Garibaldi was traded to the K.C. Royals.  As the 1971 season opened, he was traded to the expansion San Diego Padres, for whom he pitched at AAA  Hawaii for two seasons before retiring.

Garibaldi didn't make it onto a mainstream baseball card until after his major league career was over. In 1970 Topps pictured him with the S.F. Giants. In 1971, he was pictured on Topps and O-Pee-Chee cards with the Royals, though he never played with them. Each of his Topps cards is in the more expensive high-number series.