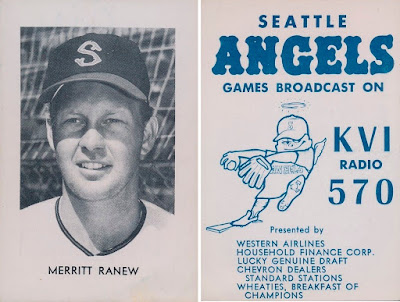 One of the most memorable on-field incidents occurred on Aug. 22, 1965, when S.F. Giants pitcher Juan Marichal hit Dodgers catcher John Roseboro over the head with a bat.
An iconic photo that shows Sandy Koufax trying to intervene has insured that the ugly attack has not been forgotten 50 years later.

Many baseball fans and collectors are not aware that a similar incident occurred a year later. That attack is little known because it took place in the Pacific Coast League, rather than the majors.

In the May 28, 1966, issue of The Sporting News, Clancy Loranger, Vancouver B.C. baseball writer, provided this account under the headline, “Rosario Banned for Season / After Bat-Swinging Ruckus”.

Dewey Soriano, Pacific Coast League president, acted swiftly and forcefully here following an ugly bat-swinging incident reminiscent of the Juan Marichal-John Roseboro affair in the Vancouver-Seattle game May 11. Seattle Angels catcher Merritt Ranew was taken to a hospital with head injuries when Mountie outfielder Santiago Rosario conked him with a bat during a wild riot that erupted in the fourth inning. Fewer than 24 hours after the free-for-all which saw both benches emptying following a two hour forty minute investigation during which more than 20 witnesses were interviewed, Soriano delivered these rulings.

The 25-year old Rosario who was batting .257 for the Mounties was suspended for the remainder of the PCL season including the playoff and fined $250.

Vancouver outfielder Ricardo Joseph, who precipitated the fracas by charging the mound after he’d been hit in the back by a pitch thrown by pitcher Jim Coates and continued the feud in a hotel lobby the next day was suspended for the four remaining games of the six-games series and fined $100. Soriano made it clear that Joseph was suspended for visiting a downtown hotel the morning after the riot, punching Coates in the mouth, loosening two of the pitcher’s teeth. Mounties outfielder Tommy Reynolds was fined $100.  After the first Joseph-Coates altercation peace had been restored but Reynolds started a second phase of the battle at Capialano Stadium by bunting, then veering off the base patch and charging Coates, knocking him down. 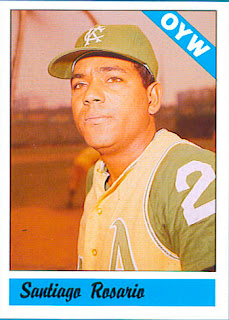 Seattle’s Ranew, who is suffering considerable pain was released from the hospital the day after the brawl and flown back to Seattle also drew a $100 fine. Ranew had twice roared to Coates’ defense, socking Joseph the first time. He was doing battle with Reynolds when Rosario, who had been in the on-deck circle, rushed into the fray and felled him with the bat. Manager Bob Lemon of the Angels also drew a $100 impost. Soriano said he fined Lemon for quotes in the Vancouver and Seattle papers to the effect that if the league doesn’t take care of Rosario, we will.

Coates, long-time Yankees pitcher who is accused by Vancouver players of throwing at Negro and Latin-American players, wasn’t fined. Soriano said that he couldn’t find that the pitcher had deliberately thrown at the hitter after reading the reports of umpires Jerry Dale and George Maloney and talking to the two umpires. Soriano did rule however that Coates couldn’t pitch in any remaining games of the series. Coates added an extra fillip to the wildest night in the 15-year history of the stadium by coming within one strike of pitching a no-hitter against the Mounties. He had allowed only two Mounties to reach base, had two outs and two strikes on Ted Kubiak in the 9th inning when the Vancouver shortstop singed sharply to center. Ramon Webster then homered but Coates emerged with a 3-2 victory.
In imposing what is thought to be the strongest sentence ever assessed in an incident of this kind, Soriano stressed that Rosario had the right to appeal to Phil Piton, National Association president, but also said that there could be a review of Rosario’s case and the suspension could be increased but no decreased depending on the ultimate condition of Ranew. Ranew suffered a concussion and four-inch gash on his head. Doctors described him as badly hurt and said he was shelved at least a month. Several others came up with physical injuries in the free-for-all. Joseph was cut in the face and head requiring four stitches. Lemon nursed a gashed left leg while his opposite number, Manager Mickey Vernon of Vancouver also suffered a leg cut while trying to break up the melee.

After the game Reynolds told reporters “a Seattle player told me before the game to stay loose because Coates would be throwing at us. Joseph told me he heard the same thing.” Neither Joseph nor Reynolds would identify the Seattle players that issued the warning. Coates vigorously denied the charge. Last year San Francisco’s Marichal was fined $1,750 and given a nine-day suspension for striking the Dodgers’ Roseboro with his bat.

Rosario was playing center field for Vancouver in that May 11 game. Attendance was announced as 1,461. At the time, Seattle was in third place and Vancouver in sixth place in the six-team PCL Western Division.

Ranew had surgery in Seattle June 6 to remove a blood clot on the brain. He had been hospitalized since May 11. He was released from Swedish Hospital in Seattle on June 30, almost six weeks after being clubbed. Initially he was at liberty during the day, but because he had no home in Seattle he spent nights at the hospital for about another 10 days.

The unbylined article read,
The suspension of Santiago Rosario, Vancouver first baseman, has been extended to one full year with the possibility that his expulsion from the game might be made permanent. In a decision announced on May 27, President Phil Piton of the National Association rejected Rosario’s appeal from the penalties assessed by Dewey Soriano, the Pacific Coast League prexy, instead ruled that no request for reinstatement will be considered until May 11, 1967, one year from the date that Rosario hit Merritt Ranew of Seattle in the head with a bat. Ranew’s condition at that time will determine whether Rosario can be reinstated, Piton said “Soriano originally fined Rosario $250 and suspended him for the remainder of the 1966 season. Pitson said Ranew’s condition led him to increase the suspension for a full year.

The Seattle catcher is definitely through with baseball for the season, and possibly all time, his physician reported. Meanwhile Rosario, back home in Puerto Rico, asked the parent Kansas City A’s to pay his salary for the season but he received a negative reply.
The suspension may keep him out of winter ball.

On June 4, Ranew was still suffering from a brain injury and some facial paralysis. The final diagnosis of the extent of his injury was not yet available. Surgery was scheduled to relieve a blood clot on the brain.

The stricken catcher returned to his home at Albany, Ga., in late July. He maintained a quarter horse and Appaloosa breeding facility there.

He was traded to the Chicago Cubs in March 1963, then to the Braves in June, 1964. After opening the 1965 season with AAA Seattle, he played most of the year with the California Angels.

The Angels sent Ranew down to Seattle for 1966, where he suffered the near-fatal clubbing.

Ranew sat out the remainder of the 1966 season. He returned to Seattle for 1967 and moved on to Syracuse for 1968. He returned to the majors in May, 1969, catching, pinch-hitting and playing a little left field for the Seattle Pilots.

He didn’t stick with the team when it moved to Milwaukee for 1970, he split that season between AAA Hawaii and Denver, then closed his pro career with Hawaii in 1971.

The bat-wielding Santiago Rosario was in his 7th pro season in 1966, having been signed as a first baseman and reserve outfielder in 1960 by the St. Louis Cardinals. He climbed the Cards’ minor-league ladder for four years before being dealt to the Kansas City Royals for 1964.

After serving his suspension in 1967, he returned to Birmingham but managed only a .167 average. He joined the Atlanta Braves organization, 1968-71, playing at AA Savannah and Shreveport and AAA Richmond. He played 1973-76 in the Mexican League.

Because his major-league career was less than a year long, Rosario never appeared on a Topps card. Larry Fritsch remedied that by including Rosario in his 1983 One-Year Winners card set. Rosario was also included among the postcards issued by Jim Elder in 1968 and can be found in the 1972 Puerto Rico League sticker set. 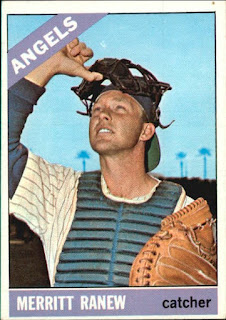 Ranew also has a card in the 1967 Seattle Angels popcorn set, pictured at top.
Posted by Bob Lemke at 11:14 AM