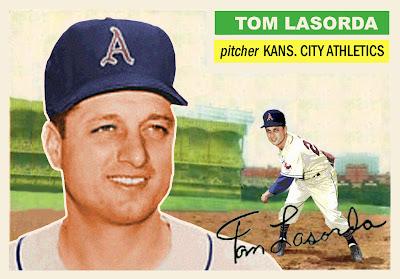 Among my favorite baseball card sets from childhood was the 1956 Topps issue. No longer forced to compete with Bowman for player contracts, the '56T set jumped to 310 cards from the previous year's lineup of 206, meaning that virtually of the day's stars were included (with the notable exception of Stan Musial).

While the '56s featured the same combinations of portraits and action photos that had been used in 1954-1955, the addition of real stadium backgrounds was an appealing innovation.

Today the 1956 format is one of favorite to use in creating custom cards. Because of the combination of elements needed to replicate that style, however,. it is one of the most challenging. I've recently completed my sixth custom in the '56T style and share it with you herewith.

The Kansas City Athletics were Lasorda's last stop as a major league player. He had been purchased from the Brooklyn Dodgers on March 2. After going 0-4 with the A's, he was sold to the New York Yankees on my fifth birthday, July 11, 1956. The Yankees immediately sent him to their AAA farm club in Denver. 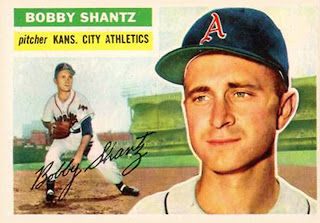 Surprisingly, at least two photos of Lasorda in the uniform of the Kansas City Athletics have crossed my path in the past couple of years. As detailed in my posting of June 8, 2011, he appears on a team-issued postcard. More recently, I found a black-and-white publicity type photo of Lasorda with fellow A's pitching prospect Troy Harridge. That image was strong enough that I realized it would be possible to create a "card that never was," a 1956-style Lasorda-as-Athletic.

For the background of my custom card, I picked the 1956 Topps card of Bobby Shantz. You'll recognize that I reversed the background to allow me to orient the portrait of Lasorda facing his left so that he appears looking into the body of the card, rather than out the border.

For the action picture, I found on a Lasorda website a much higher-resolution version of the picture that appears on the team-issued postcard. Like the portrait photo, it had to be colorized. As a bonus, that A's team-issue card had a facsimile signature of Lasorda's mid-1950s autograph.

If you're a real fan of Fifty-six Topps, you'll recognize that my attempts to convert photographs to artwork still leave something to be desired, but by the time the cards are printed, the look is not all that far off.

Creating the backs of '56-style custom cards can be the biggest challenge. I have to find cartoon on original cards that can be re-purposed to fit the baseball biography of the new player.

I caught a real break on the back of Ron Negray's card. The center panel of the cartoon there was perfect for Lasorda; I only had to change the number of years that Lasorda had toiled in the Brooklyn farm system. The right-hand cartoon on my Lasorda back was modified from Billy Pierce's 1956 Topps, and the left-end cartoon was taken from Karl Spooner's card.


The end product is a custom card of Tommy Lasorda in an "alien" uniform that I'm happy to include in my opus of custom card work. 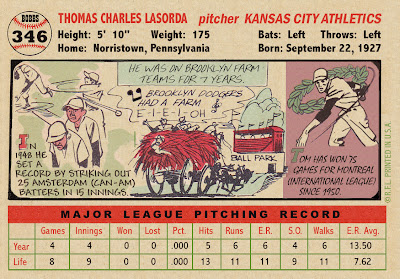