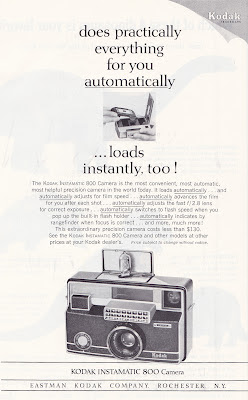 Occasionally in the past I have posted about how the prices of high-tech consumer goods have dropped so precipitously over the past 50 years.

I was struck by another example while paging through a 1965 issue of National Geographic.

There was an ad for the Kodak Instamatic 800 camera.  The camera was one of the first to use "drop-and-load" technology of film cartridges.

Besides such convenient film loading, the Instamatic 800 was advertised as "automatically" adjusting for film speed, advancing the film for each exposure, adjusting the lens and flash speed, etc.

As I am wont to do in such instances, I am going to provide an inflation-adjusted comparison of that $130 to today's dollars. It's $889.

On reflection, that $900 seems to be about right for a high-end digital camera today.

Just as there were lower-price cameras available in 1965, there are cheaper alternatives today. A sturdy little digital point-and-shoot camera can be found all over at $10 or so. And today's $10 camera can do everything the "$889" Instamatic 800 did . . . and more.

If you're nostalgic for a Kodak Instamatic 800, I see they are widely available on eBay for less than $25 for a complete camera kit with case, flash bulbs, manual, other accessories, etc. Finding film and getting it processed is likely not so easy.