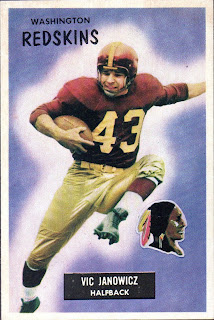 In the late 1940s and early 1950s under coaches Wes Fesler and Woody Hayes, the Ohio State Buckeyes employed the single-wing offense about 60% of the time and the T-formation on most other occasions. Vic Janowicz was the tailback in the former, and halfback in the latter. Oh, he also kicked, punted, returned kicks and played safety in an era when the two-platoon system was regaining its popularity.

Janowicz’s versatility and prowess were showcased on Oct. 28, 1950, when he scored 14 points in the first three minutes of the game against visiting .

On the first play from scrimmage, Janowicz recovered a Hawkeye fumble. Four plays later he scored, then kicked the extra point.

He then kicked off to , who went three-and-out. The punt went to Janowicz, who ran it back 61 yards for a touchdown. He again kicked the PAT.

Before two more minutes had elapsed, he scored on a touchdown pass to Tony Curcillo, then added the extra point.

During the remainder of the afternoon, Janowicz passed for three more touchdowns and kicked seven more extra points (he missed one). He carried the ball six times for 31 yards (an average of 5.1 yards per attempt) and was five-for-six passing, for 128 yards.

He accomplished all this playing only 13-1/2 minutes.

There’s no telling what he might have accomplished if that game had been played in today’s era of running up scores to satisfy some computer ranking scheme. 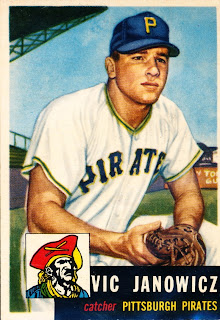 After the OSU-Iowa game, Buckeye coach Wes Fesler said, “No team ever had more breaks than we had. There is no great feeling of satisfaction among the coaches. We know we won’t get scores that easy the remainder of the season.”

He added, “You might not believe this, but no one hates that big total more than I. But what was I supposed to do? If you kick on first or second down, you’re insulting the other team. You can’t tell a boy to go in there and not give his best.”

Janowicz went on to win the Heisman Trophy that season, and was named The Sporting News #1 collegiate performer.

Because he owed Uncle Sam a hitch in the Army, Janowicz was not taken until the seventh round (#79 overall) in the 1952 NFL draft by the Washington Redskins. He went on to a modest two-year (1954-55) career in the NFL, while also playing for the Pittsburgh Pirates in 1953-54. An auto accident in 1956 ended his professional athletic career.