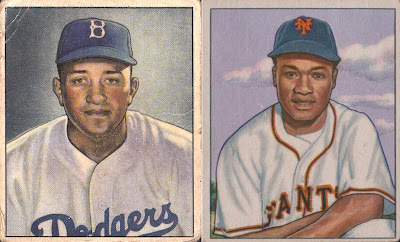 I wonder if the 34,468 fans at Ebbets Field on July 8, 1949, had any idea they were witnessing baseball history when Henry Thompson of the New York Giants stepped to the plate to lead off the top of the first inning.

On the mound for the Brooklyn Dodger was Don Newcombe. It was the first time that a black batter had faced a black pitcher in a regular major league game.

Thompson, who’d had a two-week trial with the St. Louis Browns in 1947, was called up from Jersey City (International League) by the Giants while hitting .296 with 14 home runs.

On July 8 he made his National League debut starting at second base in place of Bill Rigney, who was nursing a bone bruise on his glove hand.

Thompson popped out in his first at-bat against Newk. In the third inning he drove Carl Furillo to the wall to catch a long fly. Thompson went hitless for the day as the Dodgers won 4-3.

Thompson’s teammate and former roommate Monte Irvin also debuted in that July 8 game. He drew a walk as a pinch-hitter in the eighth inning, but by then Newcombe had given way to relief pitching.

Four days later, in the 16th annual All-Star Game at Ebbets Field, history was again made. Larry Doby (Indians) of the winning American League squad, and the Dodgers’ Newcombe, Roy Campanella and Jackie Robinson for the N.L. were the first blacks to play in the All-Star Game.