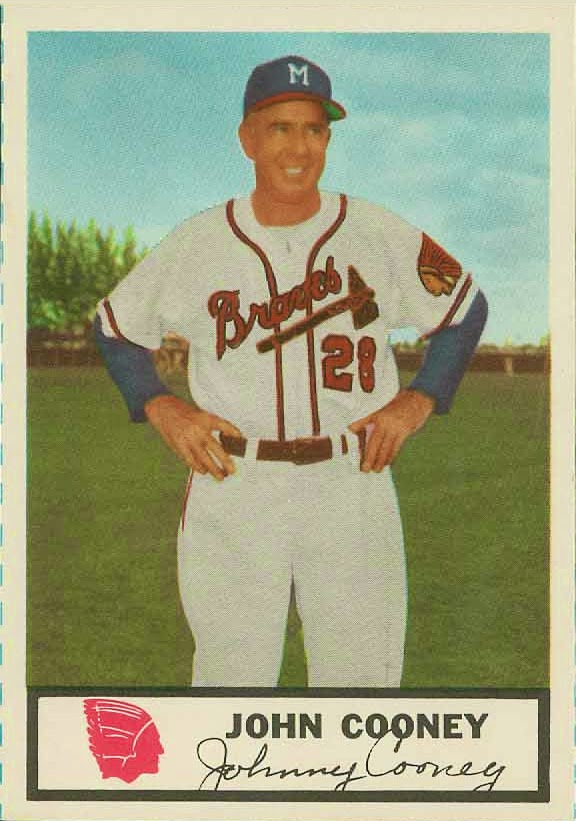 One of my favorite cards from the 1955 Johnston Cookies Braves regional issue was that of coach Johnny Cooney. He just looked like such a pleasant fellow. Heck, the write-up on back said he was "Known for courtesy and understanding . . . a real credit to the game." With that big smile he kind of reminded me of my Uncle John.

While poring over the 1943 microfilm of The Sporting News, I learned that Cooney had an unusual major league home run history.

He ended his playing days with Kansas City in the American Association in 1945.

His first big league circuit clout came near the end of his 15th season.

On Sept. 24, 1939, playing in the Polo Grounds, Cooney connected for a home run off Giants pitcher Harry Gumbert. The following day, with Bill Lohrman on the mound, Cooney hit another home run.

Then he never hit another.

He played five more seasons in the majors, about 1,050 at-bats, without another home run.

In his nine seasons in the minors, Cooney had a total of 12 home runs in nearly 2,600 at-bats.

You can read a full account of Johnny Cooney's career on the SABR website, penned by Ray Birch: http://sabr.org/bioproj/person/9a451e51 .