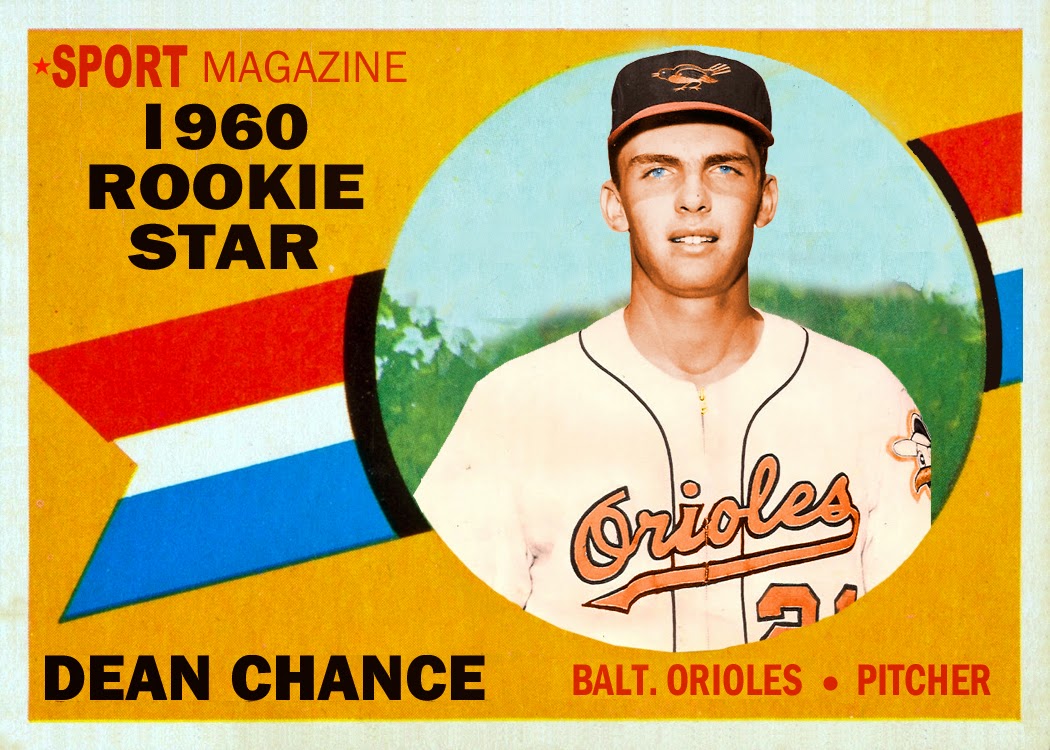 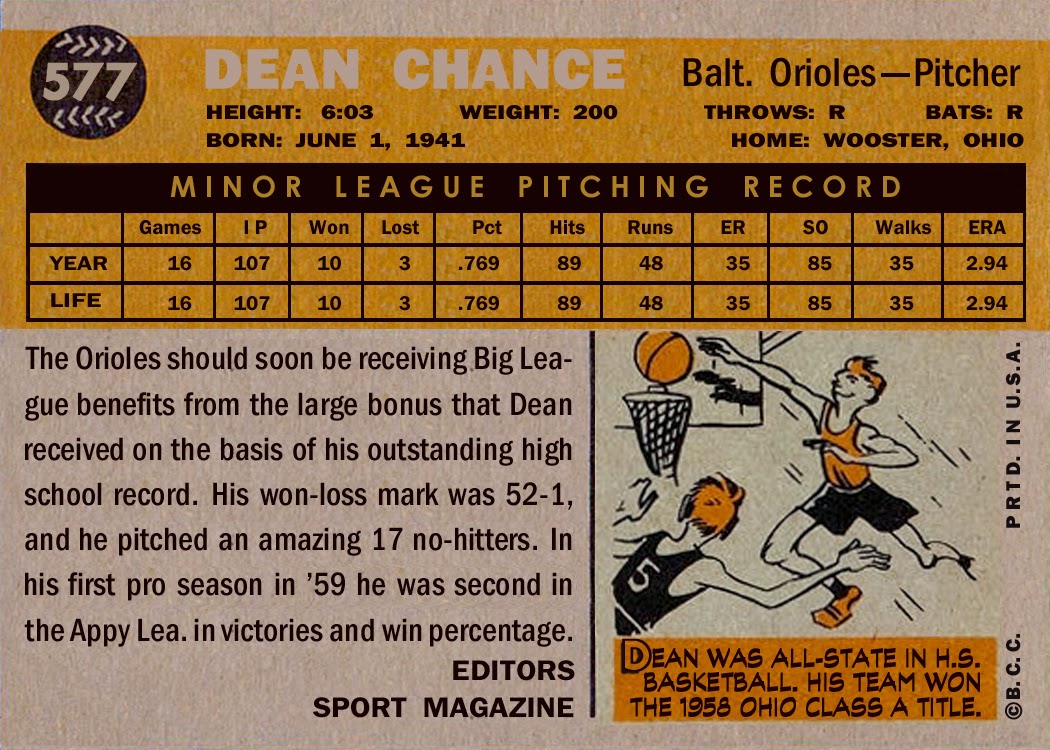 Recently while reading microfilm of the 1964-65 seasons of The Sporting News I gained a deeper appreciation for Dean Chance.

Chance had become the Los Angeles Angels’ first 20-game winner in 1964 (20-9), leading the major leagues with a 1.65 ERA and 11 shutouts. That year he became the youngest pitcher ever to win the Cy Young Award.

The sporting papers in the 1964-65 off-season were filled with Chance's intentions to land a $50,000 contract from Gene Autry for 1965, doubling his salary.

He wasn’t going to put all his eggs in one basket, however, and in the Oct. 10, 1964 issue of The Sporting News he shared his winter plans with L.A. baseball writer Russ Newhan.

Chance said his first post-season income would come from an auto dealership where he was going to participate in raffling off the baseball with which he shut-out the Minnesota Twins on Sept. 25 for his 20th victory of the season.

The Angels’ ace seemed most proud of a cross-country billiards exhibition tour he’d put together and then sold to Brunswick as a sponsor. Chance was going to serve as master of ceremonies and be accompanied by former world champions and trick-shot artists Jimmy Moore and Don Willis. Fellow Angels pitcher Bo Belinsky was going to join Chance for some of the exhibitions. Chance said he was going to collect $200 each for his bookings from New York to San Diego.

Taking part in that old-time tradition of ballplayers’ promoting shaving products, Chance was going to collect $2,000 each (plus residuals) for filming two shaving cream TV commercials.

Chance was also going to do some acting, along with moundmate Bo Belinsky, in the musical Damn Yankees, at Melodyland, a theater-in-the-round located next to Diseyland. “I can’t dance or sing,” Chance admitted, “so I don’t know why they want me.”

Newhan revealed that Chance would also have income from a farm he owned.

Finally, Chance would be booking off-season banquet appearances for which he would be paid up to $750 each.

It all seems so nostalgic . . . major leaguers working in the off-season, and the concepts of “pumping gas,” and “service stations.”

He was 4-0 versus the Bombers that season, while also shutting them out for 14 innings in a game in which he gave up only three hits but did not figure in the decision.

He gave up only one run in 50 innings pitched against New York; that was a homer to Mickey Mantle. His ERA against them was 0.18 and the Yankees hit just .086 off him.

Other fun facts
At Northwestern High School in Wayne, Ohio, Chance’s teams won the state Class A (200 or fewer male students) championships in basketball (1957-58) and baseball (1959). He said in a 1965 TSN interview that he had pitched 18 no-hitters in high school, though most sources now credit him with 17.

He lived on a farm near Wooster, Ohio, about 40 miles from Newcomerstown, where Cy Young lived in retirement.

Chance was signed as an amateur free agent for the Baltimore Orioles in 1959 by future Hall of Famer Hal Newhouser. The Angels acquired Chance in the 1961 expansion draft, after his first two seasons in the minor leagues.

I had never known that Chance had started his pro career as Orioles property and I thought it would be great fun to create a custom card reflecting that phase of his career.

I quickly exhausted my photo resources, however, and had all but abandoned my notion when I briefly mentioned my ambition for such a card while presenting on the blog (Feb. 8-14) some vintage Baltimore Orioles baseball cards from collector Alan Strout. 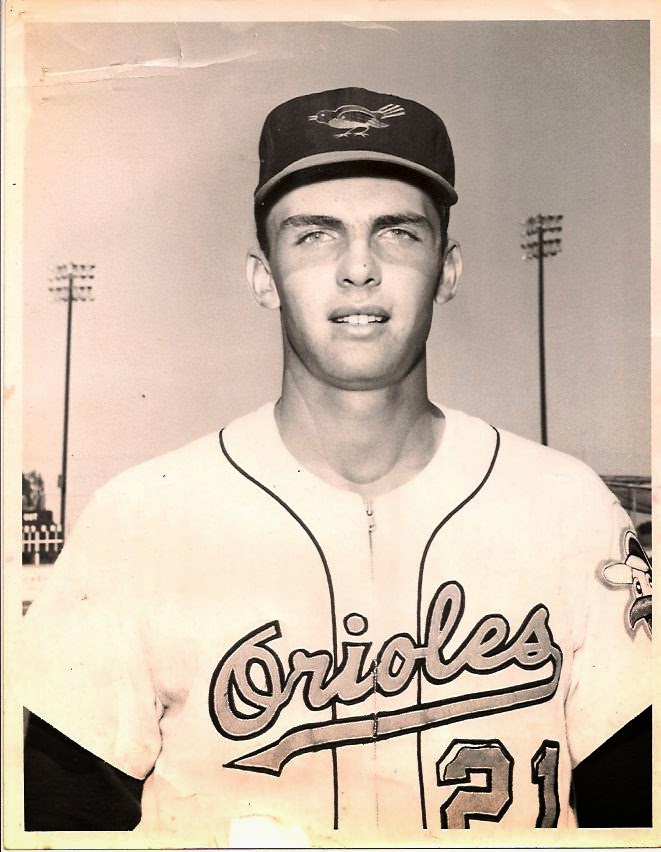 Alan saw my note and volunteered that he had a photo of Chance in an Orioles' uniform. I requested and received a scan of what looks like a team publicity photo.

I colorized the portrait and dropped it into the format of the 1960 Topps Rookie Stars subset. The result is as you see it here.