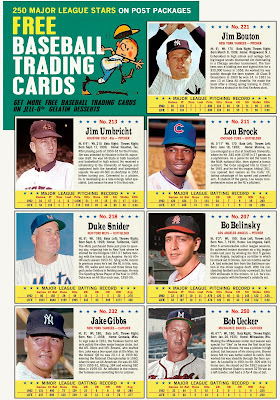 The second segment of my current custom-card project to create new cards in the formats of the cereal-box issues of 1961-63 is now ready for presentation.

Actually, I'm having a bit of a design issue with the 1962 baseball cards. That year Post presented the player names on the cards in a script font. I have thus far been unable to duplicate that script. If you have any ideas, I'd welcome them. Please email me at scbcguy@yahoo.com.

For my initial try at recreating 1963 Post baseball cards, I chose to use the seven-card box-back format that was originally found on several family-size boxes of the cereals.

While Post included 200 players in its set, there were plenty of guys that didn't make the cut, so finding new subjects was not a problem. In fact, besides the seven players I put on my new cards, I have a list of nearly two dozen others -- rookies, veterans, and traded players -- that I could have picked. Some of them will certainly show up on future creations.

Here's the first look at the seven 1963 Post-style cards I recently completed. In most cases, it should go without saying, choices for inclusion were partially based on the availability of good color photos consistent with those used by the cereal company in 1963. 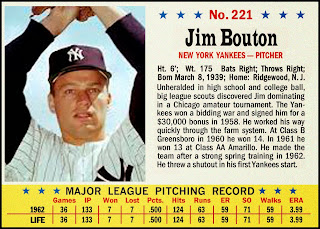 Jim Bouton. The iconoclastic insider who scandalized the establishment by writing about what really went on with ballplayers in the 1960s was a fresh-faced sophomore on his way to a starring role on the Yankees' staff in 1963. 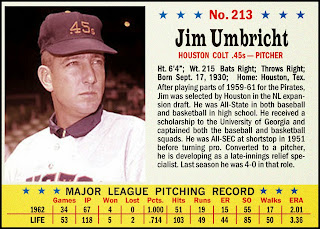 Jim Umbricht. If Umbricht had been included by Post in its 1963 set, it would have been just about a year prior to his death from cancer. I've recently been reading back issues of The Sporting News from 1963-64 and was struck by the tragedy of Umbricht's untimely passing. I really wanted to use a photo of him in his home jersey (I love the smoking six-gun design), but I struck out in my search. 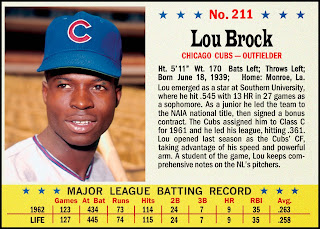 Lou Brock. The future Hall of Famer was a second-year stalwart with the Cubs in 1963. In researching the player bio, I was surprised to learn how quickly Brock developed as a player in college and the minors. 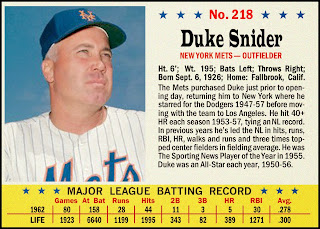 Duke Snider. Sure, Snider DID appear in the original 1963 Post set, but he was pictured with the Dodgers. There are surprisingly few good color photos of Duke as a Met. 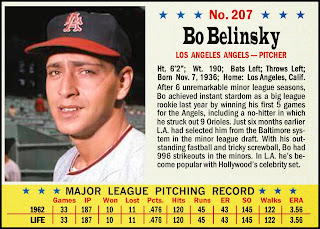 Bo Belinsky. The handsome young hurler whom the sporting press loved to characterize as a Hollywood playboy was also a frequent subject in my reading of TSN. In 1963 his reputation was being made more off the field than on, despite a rookie-year no-hitter, so it's not surprising Post passed him over in his second big-league season. 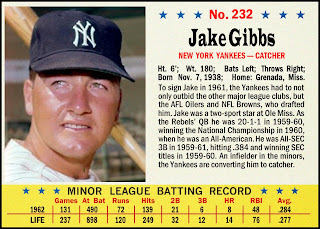 Jake Gibbs. I'd never miss a chance to make a card of an Ole Miss alum, especially a two-sport collegiate star. Gibbs had nine years as a Yankees catcher, mostly backing up Elston Howard and Thurman Munson. 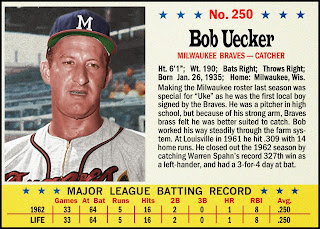 Bob Uecker. Creating a Uke card was the most challenging of this group. Color photos of him as a Milwaukee Brave are virtually non-existent. In fact, I get the impression that during his playing days he was usually reticent to have his photo taken. For my card I had to colorize a black-and-white shot, and superimpose the portrait on the background of Roberto Clemente's '63 Post card.

Though I mentioned there are many more 1963-format Post cereal cards that may see the light of day in future, I'm going too hold off working on those while I complete a set of 1963 Post baseball.

Surprisingly, the list of players whom Post missed in '62 that have piqued my interest is really not very long. It does, however, include five Hall of Famers and one who should be,.