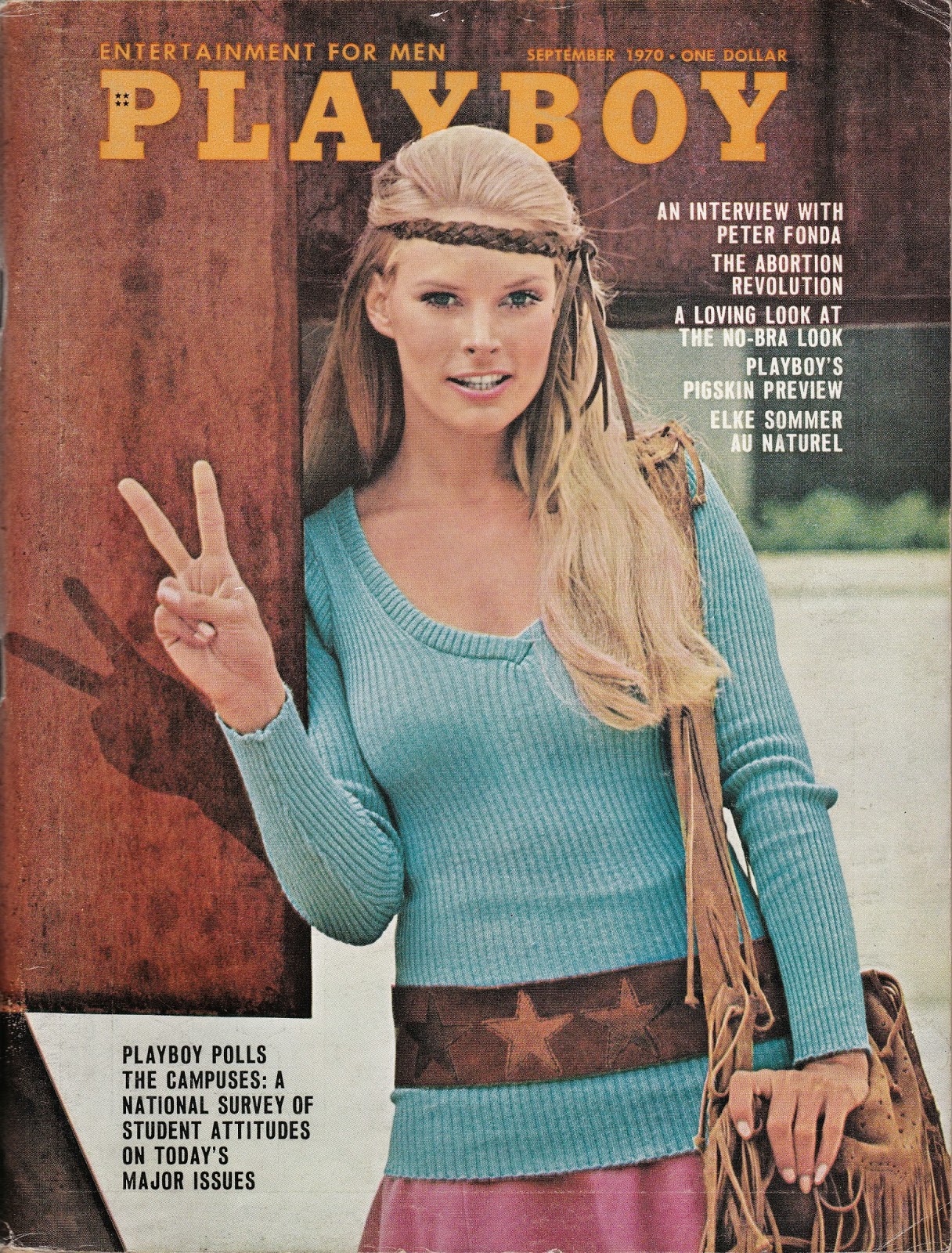 A couple of years ago, in preparation for retirement, I purchased (for $45, if I recall correctly) a complete 1970 run of Playboy magazines.

When the issues were new, I was 19 years old and not yet a regular reader of Playboy. Around 1972 I subscribed, and kept getting the magazine for the next 10-15 years, until I accepted that I was never going to be an urbane man-about-town.

These 1970 issues are right in my nostalgia wheelhouse, though. Just as would happen later in the decade, the 1970 Playboys offer me fiction that introduces writers I've come to enjoy such as Jean Shepard, P.J. O'Rourke, George MacDonald Fraser and Dan Jenkins. The ads are a look back at the products I enjoyed or aspired to in my youth. The monthly Playboy Interview subjects are names that resonate with my younger days.

The articles, letters and forums are a quaint mix of liberal claptrap of the day, espousing anti-war fervor, legalization of marijuana, reproductive rights, etc., and promoting a consumerist hedonism. I especially enjoy, from a 20-20 hindsight perspective, the article that looked into the future. I believe many of those articles were slanted to support the Playboy philosophy rather than to provide a reasoned prediction of man and mankind 25-50-100 years hence.

One of my favorite monthly features is Playboy After Dark, generally devoted to reviews of books, dining-drinking, movies, recordings and theater. I especially enjoy reading what the editors had to say about my favorite authors, musicians and movies when they were new.

For instance, in the Sept., 1970, issue, there was a review of Kelly's Heroes, one of favorite movies. Most years I watch the flick when its runs on TV over the Memorial Day weekend.

Here's what Playboy had to say about the movie.

Kelly's Heroes, another feather in the cap of cinematographer Gabriel Figueroa, is an expertly filmed World War Two comedy in which, again, the action churns around the great stone face of Clint Eastwood. Also on hand are, Don Rickles, the sultan of insult, as a conniving supply sergeant named Crapgame and swinging Donald Sutherland, as a bearded tank corpsman called Oddball. Kelly's Heroes are a company of raffish volunteer soldiers on an undercover mission--their goal is to thrust 30 miles behind enemy lines and snatch 14,000 bars of gold bullion (worth $16,000,000) from a Nazi-held bank in France. Heroes proceeds on the assumption that men who are completely cynical about fighting for ideals--or against fascism--may be considered funny, recognizable and human if they slaughter Germans and destroy villages purely for financial gain. It's an oddly corrupt idea for comedy, particularly in the character played by Sutherland as a don't-bug-me forerunner of the love generation who happens to be a carefree killer, spewing death from an armored tank.


As an aside, I have probably listened to the soundtrack CD of Kelly's Heroes (it's paired on the disc with the soundtrack of The Cincinnati Kid) more than 2,500 times. I got the CD out of the freebie box into which the editor of Goldmine magazine threw countless review copies of CDs sent in by music publishers. 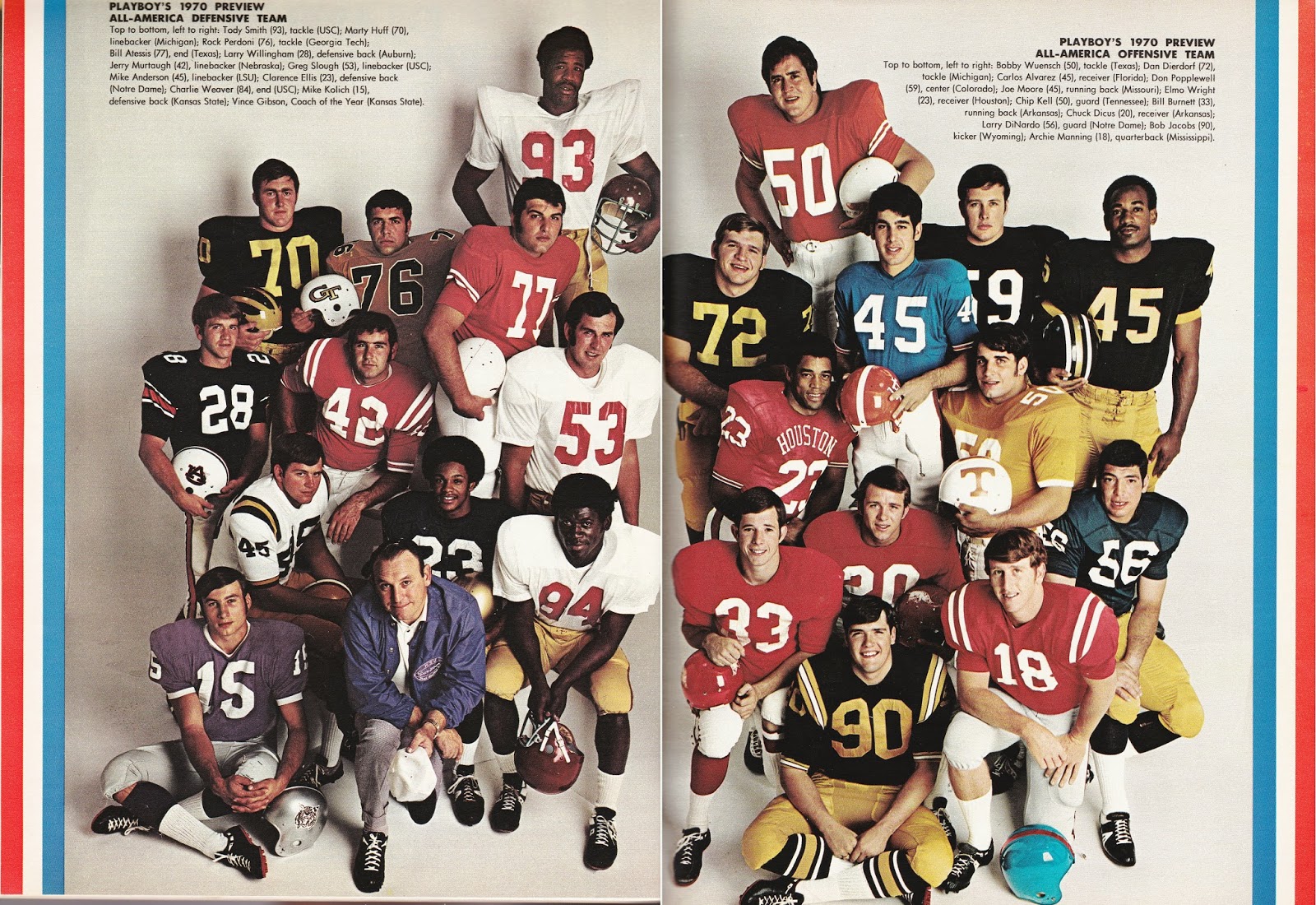 This particular issue of Playboy includes what was a regular September feature of the magazine for many years, Playboy's Pigskin Preview. Often authored by Anson mount, the magazine termed the feature a "pre-season prognostications for the top college teams and players across the nation."

The feature was well-illustrated and included lists of "Top 20 Teams," its pick of an "All-America Squad" and a list of "This Year's Supersophs." Each year the magazine flew a coach and a couple of dozen players to Chicago for group photos of "Playboy's Preview All-America" offensive and defensive teams. Notable names in the 1970 pix include Dan Dierdorf and Archie Manning. Look for the Manning photo to appear on one of my 1955 Topps All-American cards in the future, as the posed portrait is an improvement over the action photo I originally used on my card 10 years ago. 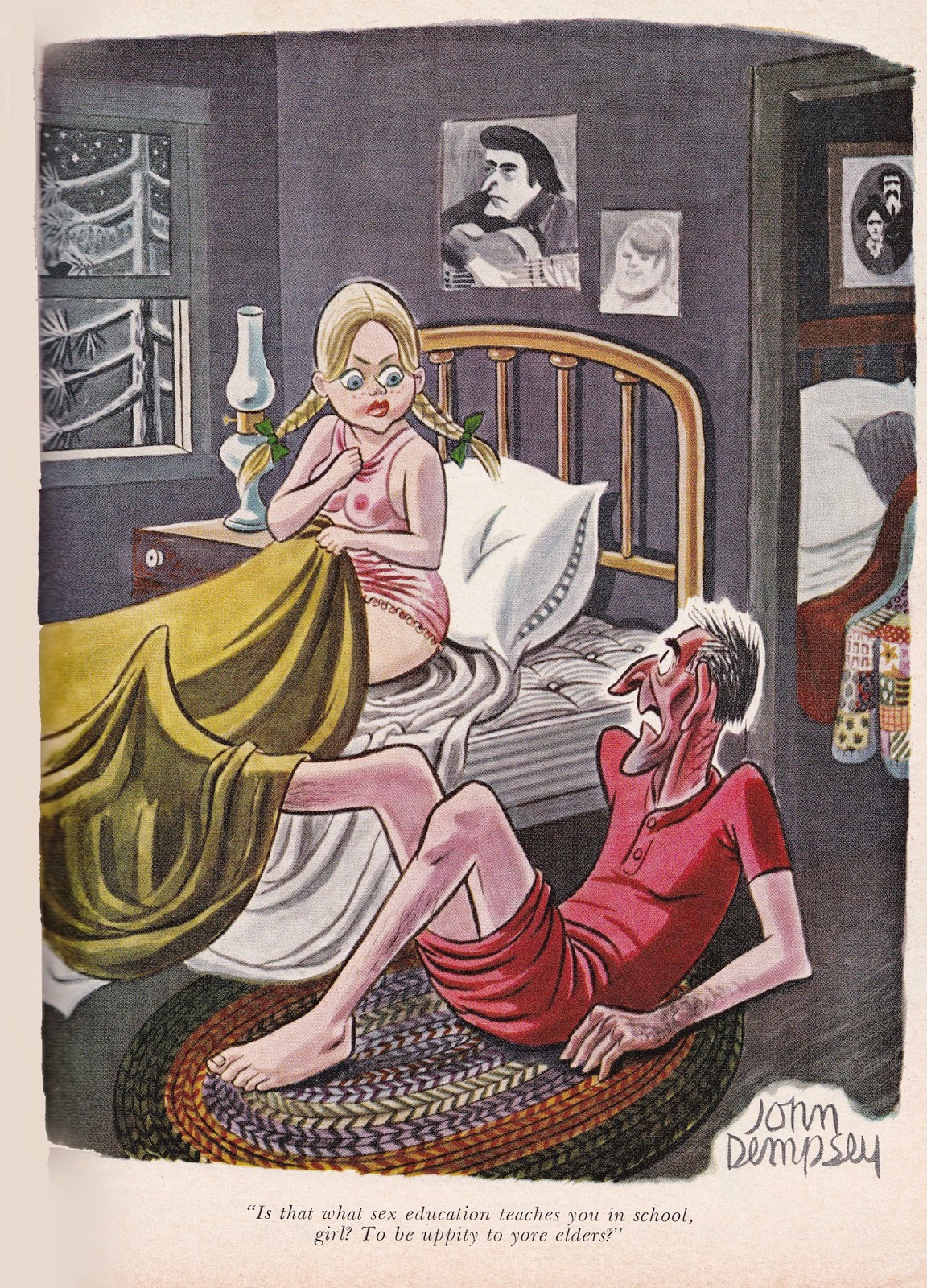 Caption: "Is that what sex education
teaches you in school, girl? To be
uppity to yore elders?" 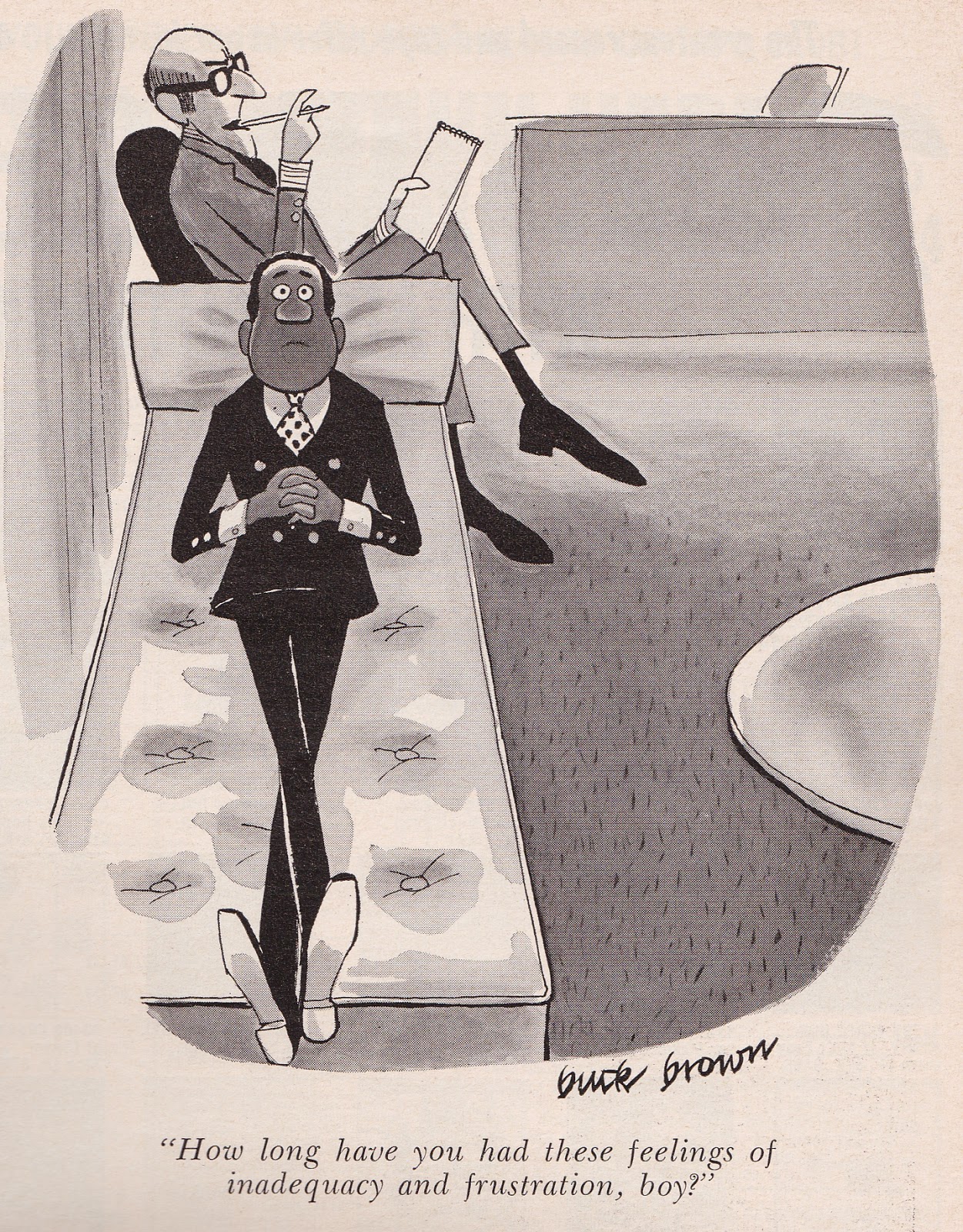 Caption: "How long have you had these
feelings of inadequacy and frustration, boy?"

I wonder if Playboy's cartoon editor ever looked into the future and imagined that a "mere" 45 years down the road, some of the cartoons in the magazine's pages would not stand a chance of seeing print in even an adult-oriented mainstream magazine. Just like All in the Family, which would debut in 1971, would never make the cut in today's hyper-politically correct culture, some of what was seen as edgy humor in 1970 would send 21st Century liberals into apoplectic fits.

And the women. These, too, I aspired to circa 1970. The women in 1970 Playboy are more "natural" to my now-mature eye. There doesn't seem to be as many breast-augmented models. And, you might be surprised to learn that in 1970 Playboy, a woman's preference in hirsute pubic presentation was left to the imagination through the use of skillfully placed props, camera angles and contortionist poses.

One of the biggest surprises I discovered about retirement is that I don't find or make the time I thought I would for reading. Thus I suspect my cache of 1970 Playboys will outlive me.