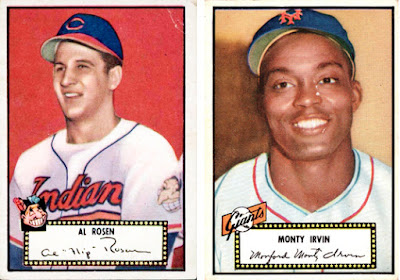 The death of Al Rosen on March 13 brought to 50 the number of surviving subjects from the iconic 1952 Topps baseball card set. (That number is predicated on the accuracy of biographical data on the baseball-reference.com web site, and my reading thereof. We should not discount the possibility that the death of one or more of the players in '52T have passed without the web site being aware.)

Considering the '52T set was issued 63 years ago, I would not have guessed that 12.3% of the players appearing on those cards are still alive today.

As of today, here is a list of those survivors by their current age, oldest to youngest. 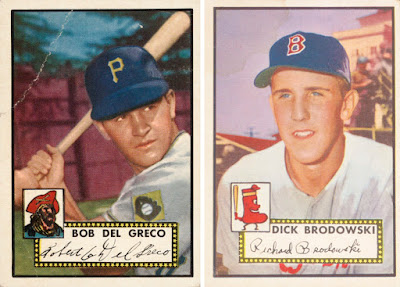 Between the 82-year-olds, Del Greco is the youngest, having been born April 7, 1933. Brodowski was born July 26, 1932. Del Greco was only the third youngest player in the major leagues in 1952. Bill Bell was born Oct. 24, 1933 and Jim Waugh was born Nov. 25, 1933. All three were teammates on the 1952 Pittsburgh Pirates. Neither Waugh nor Bell was included in 1952 Topps. Waugh made his lone bubblegum card appearance in 1953 Topps, and Bell was never on a mainstream baseball card.

Another peculiarity is that 10 of the surviving players -- 20% -- are named Bob or Bobby.

So far in 2015, players from 1952 Topps who have died are Rocky Bridges, Don Johnson, Minnie Minoso and Rosen.

Considering that more Americans are living longer today, and that at least for some portion of their adult lives, the players of 1952 were active athletes, its impossible to speculate on how long the remaining 50 will be with us.