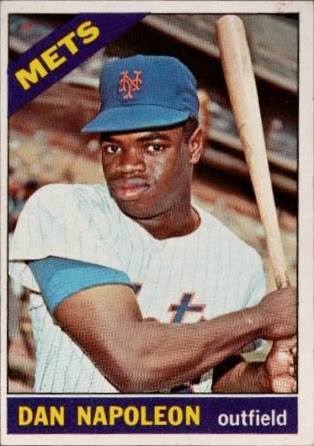 Uncommon commons: In more than 30 years in sportscards publishing I have thrown hundreds of notes into files about the players – usually non-star players – who made up the majority of the baseball and football cards I collected as a kid. Today, I keep adding to those files as I peruse microfilms ofThe Sporting News from the 1880s through the 1960s. I found these tidbits brought some life to the player pictures on those cards. I figure that if I enjoyed them, you might too.

There's nothing more embarrassing in baseball than being caught by the old hidden-ball trick. It's so abashing, in fact, that today's more professional professional ballplayers don't seem to try it anymore so as not to make their colleagues appear foolish.

I recently read in the July 11, 1964, issue of The Sporting News of a different take on the hidden-ball trick that wasn't so much embarrassing to the "victim," but rather than to the perpetrator and the umpire who was fooled by it.

BINGHAMTON, N.Y.—A high fly by Dan Napoleon of Auburn (NYP) soared toward the outfield fence, June 25, heading toward home-run territory, but Burlington (sic) outfielder John May leaped and came down with the ball, making a spectacular catch—at least that is the way it looked.
Some 15 minutes later, May admitted that he did not catch the game ball, which went over the fence. He said he went through all the gestures, but actually had substituted a ball he had in his uniform pocket.
Umpire Ed O’Hara, on the bases, said afterward: “I had my eye on the ball all the way and when I saw it was going to leave the park, I started to signal for a homer. But then just before the ball went out, I heard a crash—May bumping into the wall—and took my eye off the ball. Then when I saw May with a ball in his glove, I changed my signal.
O’Hara was not the only one who thought the ball had gone out of the park. Auburn Manager Clyde McCullough came racing out and insisting that Napoleon’s shot had left the park.
The two went to the fence and consulted with a boy who had a ball which, he said, was the one Napoleon had hit and had gone through a tree behind the bleachers. Here plate umpire Larry Bowman joined the discussion and the three marched toward the Triplet dugout to confer with Manager Andy Pafko.
Pafko called May out of the dugout and he finally admitted that the ball he “caught” was one he’d taken out of his uniform pocket and was not the one Napoleon had hit.
So 15 minutes later, Napoleon rounded the sacks to officially earn his homer.
After it was over, May apologized to Manager McCullough for his action. Pafko, after talking to May said he would take no action against the player. He declared: “In all my years in baseball, I have never seen anything like it.”
President Vince McNamara of the league, appraised of the facts, appeared to think that May’s embarrassment was enough and that he would take no further action.
Incidentally, Auburn won the game 8-2.

At the time of incident, Napoleon, who was in his first season of pro ball, leading the New York-Pennsylvania League with a .367 average. His 18 home runs and 60 RBI were also at the top among the league’s batters. In his first week in Organized Baseball, through May 10, he'd hit five home runs in six games.

Those numbers earned Napoleon a promotion to the National League to open the 1965 season. He hit a pinch-hit single in the bottom of the 11th inning of his first major league appearance with the Mets, later scoring in the 6-7 loss against the Astros.

As a trivial aside, Napoleon was responsible for Casey Stengel's 3,000th win as a professional manager. On April 24 at Candlestick Park, the Mets trailed the Giants 4-6 with bases loaded and two outs in the top of the 9th inning. Stengel put Napoleon in to pinch-hot for Roy McMillan and he delivered a triple to give the Mets the 7-6 victory.

Napoleon appeared in 57 games for New York through Aug. 3, mostly as a pinch-hitter, though getting some time in left field and even a few games at third base.


He was sent out to the top club in the Mets' farm system, Buffalo of the International League, who were languishing in last place. He hit .274 for the Bisons and was included in the Mets' September call-ups. He ended his rookie season in New York with a .144 mark.

Napoleon was back in AAA for 1966, with the Mets' new IL team, the Jacksonville Suns. He hit .261 with a little power and was again a September call-up.

With New York in 1966, Napoleon played in a dozen games, mostly in left field. He hit .212 to bring his major league career average to .162. He never returned to the bigs.

Napoleon played two more years at AAA with Tulsa, Hawaii and Denver, in the Cardinals, White Sox and Twins organizations. He ended his pro career with three seasons at Class AA Arkansas in the Cardinals' chain as a player/coach.

In 1970, Napoleon achieved a bit of post-career fame when he was named to Jim Bouton's "all-ugly nine" in the book Ball Four.

While I wouldn't use that term to describe Napoleon, his visage as portrayed on his only Topps baseball card, in 1966, does show him to have been a man of, shall we say, stern countenance ("penitentiary face," perhaps).

Looks aside, Danny Napoleon appears to have enjoyed a strong fan base, as related on reports at the Ultimate Mets Database site at http://ultimatemets.com/profile.php?PlayerCode=0088&tabno=7.

As for the perpetrator of the hidden home run-ball hoax, John May never made it to the major leagues. He played five seasons in the Milwaukee/Atlanta Braves organization, never getting above Class A ball, despite batting over .300 overall.