It's winter; time for non-sports customs 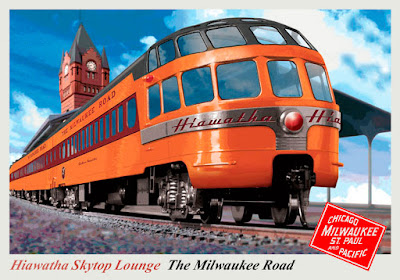 Over the years my custom card creation efforts seem to have become somewhat seasonal.

Last winter it seems as if I spent most of my card-making time on non-sports issues. That trend may continue this winter.

I've just completed another card in my extension of the 1954 Topps Rails & Sails issue.

The new card features the Skytop parlor-lounge car that was a feature of the Milwaukee Road's Twin Cities Hiawatha streamliners from 1948 through early 1971.

With World War II shortages and restrictions largely gone by the wayside in 1948, the Chicago, Milwaukee, St. Paul and Pacific Rail Road undertook a major overhaul of its rolling stock.

One of the features of the project was the creation of the Skytop parlor-lounge cars that brought up the rear of the Twin Cities Hiawathas that ran twice in the morning and twice in the afternoon between Chicago and Minneapolis.

The Skytop cars were designed by Brooks Stevens, a Milwaukee industrial designer who created everything from custom cars, motorcycles and household appliances to the Miller Brewing Company's red "soft cross" logo still being used today. (I crossed paths with Stevens a time or two at car shows in 1978-79 when I was editor of Old Cars Weekly newspaper.)

The Skytop lounge cars were built in the Milwaukee Road's own shops. A total of four were produced. They were named the Cedar Rapids, Coon Rapids, Dell Rapids and Priest Rapids. The first three named cars still exist in various states of preservation while the Priest Rapids was scrapped in 1970.


A companion line of Skytop sleeper lounges was built in 1948-49 by Pullman-Standard. There were a total of six built for use on the Milwaukee Road's Olympian Hiawatha runs between Chicago and Tacoma, Wash. That route was discontinued in 1961 and all six of the sleepers were sold to the Canadian National Railway. Three of those remain extant, the others having been scrapped.

My newest Rails/Sails custom reflects my personal interest in mid-century railroading. I have 10-12 images of great locomotives from the 1930s through the 1960s that may make their way onto custom cards in the future.

As I stated in my blog post of Dec. 13, I am unable to offer examples of my new card to collectors; physical limitations of my hands have made the actual printing and cutting of my cards too difficult an undertaking. 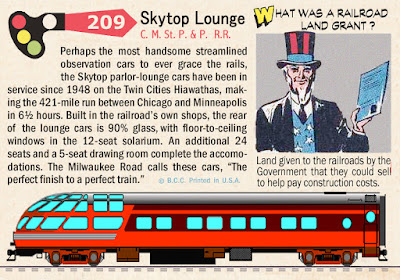