The not-so-serious side of custom cards 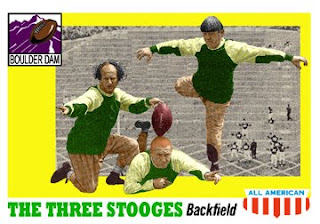 With the debut of the new Three Stooges movie, I thought I'd resurrect this 2009 posting about the custom card I created with the original trio.

Most of the 120 or so 1955 Topps-style All-American football cards that I have created over the past 6+ years have been serious efforts to make "cards that never were" in the spirit of the originals -- to honor the college football careers of players past and present.


Occasionally, though, I have colored outside the lines by making a card just for the heck of it. My Three Stooges tribute card is one of the earlier examples in that vein. 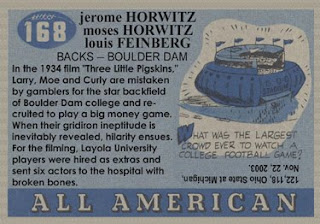 I got the idea when I stumbled across a poster of a scene from the Stooges' film, Three Little Pigskins. That poster formed the central image for my card, as shown here (I had to colorize the image).


To get the back story for my back story, I bought a used VHS tape of the movie and took notes while I watched. I believe the information about the Layola players and the cast injuries came from a biography of one or all of the Stooges.
I never did learn why the filmmakers decided to use the name Boulder Dam for the fictional college. It was probably a play on words with Boulder Dam being somewhat akin to Notre Dame. Also, the movie was shot in 1934, when the construction of Boulder Dam (now called Hoover Dam) near Las Vegas was in the news.
At a loss to create a logo for the fictional college, I stole from the Colorado Rockies' logo and substituted a football for the baseball. Not my best work.
The back of the card mentions injuries that occurred during filming. One of the broken bones was Curly's leg, although it didn't happen in a football scene, but rather when he fell down a dumb-waiter. Larry was also injured when a mis-timed punch knocked out a tooth.
Another little bit of trivia related to the movie: Lucille Ball made her only appearance in a Three Stooges movie . . . as a blonde.
Posted by Bob Lemke at 2:30 PM