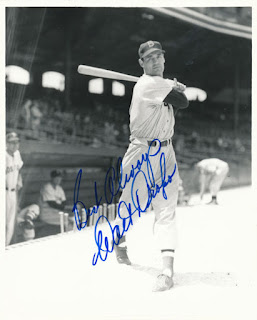 I lose myself in reading about baseball as it was 40, 50, 60 or 125 years ago, while images of baseball cards from my youth – or even further back -- put a face to the names on the page.

Occasionally what I find on my screen brings a smile as I contrast the way things were with how they are.

In his “from the RUHL BOOK” column, which was often a compilation of breezy bits and pieces (like a Larry King column)  from around baseball, TSN columnist Oscar Ruhl wrote in the Feb. 1, 1951, issue, “What’s this we hear about Walt Dropo receiving $200 for making an appearance in Maine and then selling autographed pictures of himself for 35 cents a copy after his talk?”

It’s hard to say whether Ruhl was scandalized more by the thought of the American League 1950 Rookie of the Year and All-Star “double dipping” by selling autographs at a paid appearance or the price of the signed photo. Recall that in 1951 you could buy seven wax packs of Bowman cards for 35 cents.

I'm not sure what all that says about inflation, sports memorabilia or Walt Dropo. 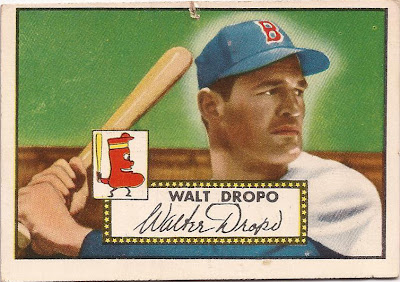