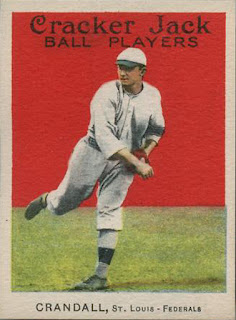 Following his big league days, he pitched for another 13 years in the minors, mostly for the Los Angeles Angels in the Pacific Coast League, where he had a record of 230-151, with an ERA of about 3.00.

In one game during the World War I-shortened 1918 season, Doc Crandall came within one out of  a no-hitter.

On April 7, 1918, Crandall was pitching for the Los Angeles Angels in the morning half of a Sunday doubleheader at the ballpark. , which fielded a Pacific Coast League team of its own from 1909-1925, was a suburb of . The Angels played their Sunday “home” games there because local blue laws prohibited the sale of alcoholic beverages on Sunday in the city of .

Facing the Salt Lake City Bees, Crandall was cruising into the ninth inning. After two “easy outs” in the ninth, Crandall’s brother Karl came to bat. Doc got him to swing at a couple of curve balls, then Karl let one go by for a ball.

Catcher Walter Boles signaled for another curve, but Doc shook him off and threw a fast ball. Karl singled between third and shortstop. It was the only hit in the Angels’ 14-0 win.

Both of the Crandall brothers appear on several of the Zeenuts baseball cards of the era. Since Karl never made it to the major leagues (he played 15 years in the minors), he doesn’t appear on any of the mainstream card issues of the day. He's shown here on a 1919 Zeenuts card, when he had moved on to the S.F. Seals

Otis can be found in many of the popular cigarette and candy card series of the 1909-16 era. Shown here is a 1914 Cracker Jack card, one of the few major sets to include Federal League players.
Posted by Bob Lemke at 2:34 PM