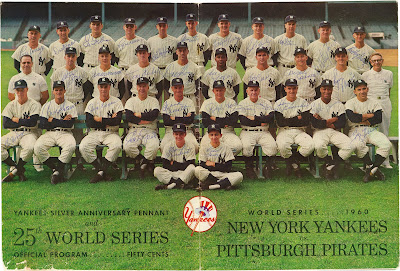 The New York Yankees version of the 1960 World Series program is a treasured piece of Fall Classic memorabilia. In nice condition today it is a $75-125 item.

Few collectors, however, realize that one of the Yankees’ biggest stars of the '60 Series is missing from the team photo on the cover.
In its coverage of the ’60 Series, The Sporting News of Oct. 19 ran a small boxed article headlined, “Red-Faced Richardson Late for Team Picture”.
In its entirety, the article read, “The Yankees had an overwhelmingly impressive World’s Series program cover—one showing the team in full color at an expenditure of an additional $4,500.
“It shows everyone, including Ryne Duren in dark glasses, Trainer Gus Mauch 20 pounds lighter than last year, and a couple of bat boys, but no Bobby Richardson.
“Why not? Bobby grinned abashedly, 'I was late.' 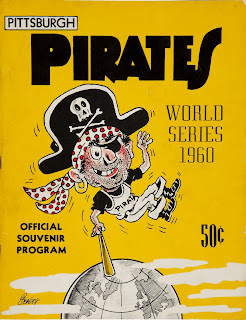 “Late? Who was supposed to notify him, anyway?
"‘Me,’ grinned Bobby. ‘I’m the player rep.’”
Richardson had led the Yankees to a 10-0 Game 3 win with a grand slam home run and a single for a record six RBIs in a World Series game.
And speaking of the 1960 World Series program . . . TSN reported that prior to Game 5, Roy Face, the Pirates ace relief pitcher, had sent a program over to the Yankees clubhouse to be autographed.


“It came back without a single signature,” according to the paper. In relief of Harvey Haddix that day, Face pitched 2-2/3 innings of hitless baseball, sealing the Yankees 5-2 loss.