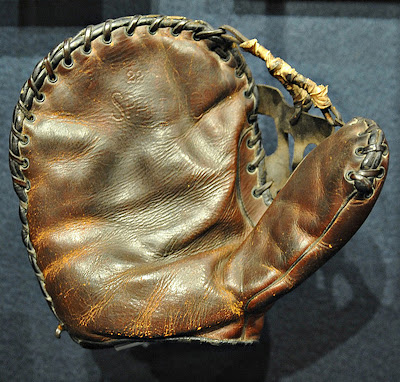 What would a glove that Lou Gehrig wore when he played at be worth in today’s collectible market?
I think I know where you can lay your hands on a couple of them . . . if you’ve got a jackhammer and the nerves of a cat burglar.
According to a short item in the “Major Flashes” roundup column of the April12, 1949, issue of The Sporting News, there are gloves (plural) stowed away in a time capsule at the school.
The article read, “The gloves used by Lou Gehrig, late first baseman of the Yankees, when he played with the Lions in 1923, are among the athletic memorabilia sealed in the new fieldhouse wall at . A steel box containing mementos from five sports was embedded in the concrete during ceremonies, March 30.”
Even if the box’s location isn’t marked with a plaque or something, today’s state of the art metal detectors should be able to pinpoint its location.
How the leather has held up over 60+ years is anybody’s guess.
Posted by Bob Lemke at 2:57 PM