When players had off-season jobs

Among my favorite types of articles in the old Sporting News papers are the summaries of major leagues players’ off-season jobs.

With the exception of guys like Williams, DiMaggio, Musial, Feller and a few others, most ballplayers in the late 1940s and early 1950s had off-season employment to make ends meet and/or to keep in shape.

During the winter months TSN would occasionally print articles by one or the other of the team’s beat writers to update fans on what their favorite players were doing while waiting for spring training.

As I’ve done in the past, rather than trying to summarize or paraphrase where I don’t have any particular insight or comment, I’m going to reprint an article that appeared in the Jan. 12, 1949 issue.

Want Car Fixed, Shirt
Washed? See the Sox
Just to get the record straight, the White Sox can do other things than lose ball games and finish in last place.
Wanna shirt washed a sagging window frame repaired or a fender dent pressed out? The White Sox can take care of you. 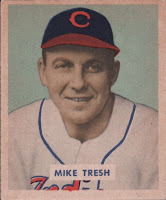 Or are you in the market for a new car, a septic tank installation, a small dab of surveying? You can find your man among the Sox.
Off-season activities of the men Manager Jack Onslaw will try to get untracked this spring range coast to coast and in a dozen trades and occupations—including that fuzzy world of breweries and cocktail lounges.
One of Onslaw’s rookie pitching prospects, Chuck Eisenmann, a 16-game winner at in ’48, is the man with a cocktail bar in his life. The Eisenmann refuge for the thirsty is in .
Another type of filling station operated by a Sox player is located in It’s the property of Pitcher Bill Evans, complete with a full line of gasoline, oil and spare tires. 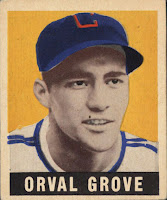 Fred Hancock, a candidate for the shortstop job Luke Appling has held since 'way back when a Republican received his mail at the White House, is working for a brewery. He’s promotion manager for a foam factory.
Surveyors among the Sox include Pitcher Allen Gettel and Catcher George Yankowski. Carpenter work in the vicinity of , , occupies the southpaw pitcher Bill Wight, and in , Infielder Don Kolloway is connected with a collision shop. Those who have lamented his so-so batting can only hope Don gets more hits in the off-season. 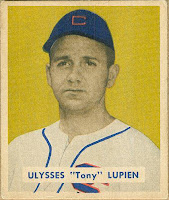 Then there’s the no tickee-no washee man, Mr. Tony Lupien, with a laundry located in . Septic tanks may be bought from Catcher Mike Tresh—he’s a Detroiter—and Pitcher Bill Briggs, a rookie, can fix you up with a suit of clothes in a department store.
Need a bulldozer? Pitcher Orval Grove, a Chicagoan, sells heavy road building and repair equipment. If you’re in the market for clay products, contact Pitcher Fred Bradley, sales representative of a concern in

Now, about that new car . . . the man to talk to is Dave Philley, the outfielder. But you may have to be patient about the whole thing. The , agency Philley owns is for the Tucker automobile.

A potential buyer for one of Dave Philley's autos would have had to be more than patient. Only about 50 of the cars were produced in 1948. Well-restored examples of the survivors have sold for more than a million dollars.
Posted by Bob Lemke at 10:51 AM