Babe: "To hell with all the Japs" 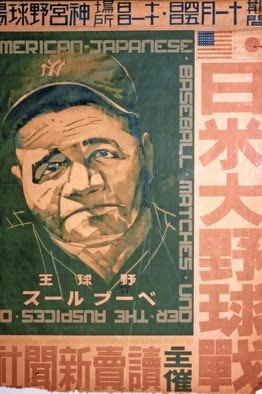 I’ve heard since childhood that during War World II Japanese troops would invoke the name of Babe Ruth to confound American troops in battle.

Some kids in the neighborhood even said that “Banzai” actually meant “Babe Ruth, go to hell!”

I thought these tales were apocryphal, until I saw a directly sourced account in the March 9, 1944, issue of The Sporting News.

Staff Sergeant Jeremiah A. O’Leary, a Marine war correspondent, was quoted as saying, “’To hell with Babe Ruth’ was the battle cry of the Japs as they charged against the Marines at Cape Gloucester, New Britain.”

According to the TSN short, when the Bambino was told of the incident, he said, “I hope every Jap that mentions my name gets shot—and to hell with all the Japs anyway.”

Ruth had visited Japan following the 1934 season, playing in a series of four exhibition games in Tokyo that drew as many as 200,000 fans.

Collectors today can find a number of contemporary souvenirs of that tour, including the poster shown here.