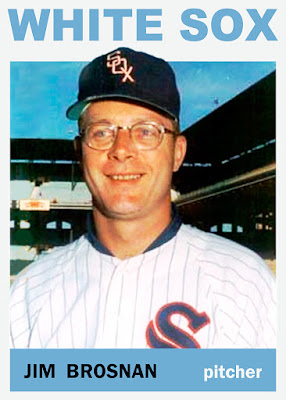 I recently finished rereading Jim Brosnan's diary-style baseball books, The Long Season and Pennant Race. The former detailed his 1959 season, the year  he was traded from the Cardinals to the Reds. The latter was his account of the Cincinnati Reds' pennant-winning season of 1961.

I first read the books in the very early 1980s. In 1982 I sent Brosnan an autograph-request letter, briefly detailing my enjoyment of the books.

He responded with a note that I framed up with a couple of his cards, including the autographed 1963 Topps card I had sent. The note read: "Dear Bob Lemke -- Thanks for the kind words about The Long Season and Pennant Race. You read the books the way I wrote them! Jim Brosnan." 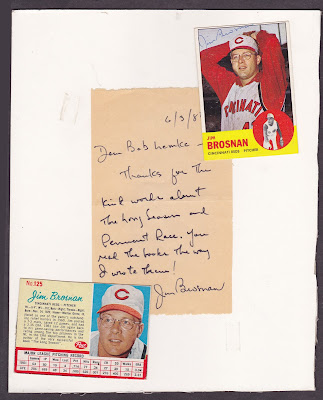 More than 30 years after I'd first read Brosnan's books, with many of those years having been spent in the baseball card publications business, I found them eminently entertaining. His accounts of clubhouse and on-field interactions with teammates and opponents really brought to life for me the guys on the baseball cards of the era that I had collected as a kid and recollected as an adult.

While baseball's bigwigs considered Brosnan's books to be something of a betrayal of the clubhouse code, there is very little about any other player or manager that put them in a negative light. Brosnan even bowdlerized their language in quotes; there isn't any word stronger than "hell" or "goddamn" to be found.

Some of Brosnan's own words are not politically correct by today's standards. He often refers to women as "broads" or "chicks."

And the PC police would surely censure him for quoting teammate Marshall Bridges in Southern, perhaps even Southern Negro, dialect.

The impetus to reread the books came from my review of microfilm of The Sporting News issues of 1964. In the early issues that season, the paper detailed Brosnan's contract dispute with the Chicago White Sox.

When Brosnan balked at the new salary and held out, Ed Short, White Sox general manager, said, “We have a lot of young pitchers and we want to give them every opportunity to make the club." When those young pitchers faded in spring training, the White Sox still refused to deal with Brosnan and added Don Mossi to their bullpen.

The real crux of the contract dispute, however, was the team's demand that Brosnan neither write nor publish any baseball books or articles during the upcoming season. Brosnan reasoned such a restriction was doubly onerous; besides impinging on his rights as an author, the team was preventing him from earning back the money that had been cut from his contract.

Brosnan tried to pressure the White Sox to back off its in-season writing ban by enlisting the aid of the Illinois American Civil Liberties Union Freedom of Communications Committee. The ACLU’s John E. Coons wrote to White Sox owner-president Arthur Allyn appealing Brosnan’s case in a missive filled with baseball jargon. Allyn called it “balderdash” and consigned it to the wastebasket.

In the March 7, 1964, issue of TSN, Brosnan ran an ad offering his pitching services. 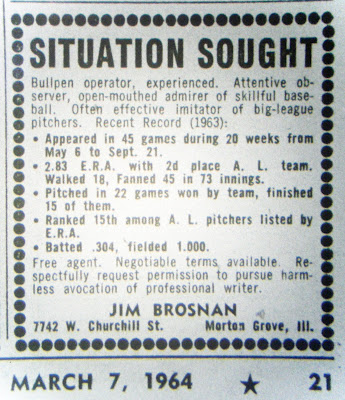 There were no takers and in the May 30 issue, The Saturday Evening Post took out an ad in TSN touting its forthcoming issue featuring an article by Brosnan. The ad read . . .

"Why can’t pitcher Jim Brosnan get a job in Baseball?

The word “blacklist” horrifies the organization men in baseball. Call it, then a remarkable coincidence that since the White Sox canned pitcher Jim Brosnan, was back in February, not one other club in either league has done business with him.

Neither owners nor managers seem to question his competence on the mound. What they question is his irreverent view of the National Pastime, and the disturbing facility with words that has made him an author. Put them together, and he’s poison to the Front Office.

For a concrete example of Jim Brosnan’s kind of baseball heresy, read “Businessmen Are Wrecking Baseball” in this week’s Saturday Evening Post.

From now on the Editors of The Post may have to buy their baseball tickets under assumed names—but you have a box seat at one of baseball’ most celebrated hassles. Get the May 30 Post today—and have a ball."

With no real pitching prospects for the upcoming season, Brosnan was hired in April as a weekend radio broadcaster for ABC. He did two five-minute spots every Saturday and Sunday.

For an excellent review of Brosnan's life, career and the place his baseball writing had in American sports literature, I can recommend the obituary penned by Bruce Weber in the July 4, 2014, issue of the New York Times. Jim Brosnan obit .

Brosnan had a nice run of career-contemporary baseball cards beginning with a 1955 Bowman rookie card and including Topps issues from 1957-63, along with many team-issued and regional cards and memorabilia.

He never made it on a card as a member of the Chicago White Sox, however. Since it was virtually Opening Day before it became apparent that Brosnan wouldn't be pitching for the White Sox, it would not have been out of the question for Topps to have included him in his new uniform in the 1964 set.

My tribute to Brosnan is a '64T-style custom card.

I was only able to find a single color photo of Brosnan with the White Sox. It's a decent, but not a great, photo; it's a bit too low-resolution. However, it worked up into a card that I don't feel would be out of place in a stack of original 1964 Topps. 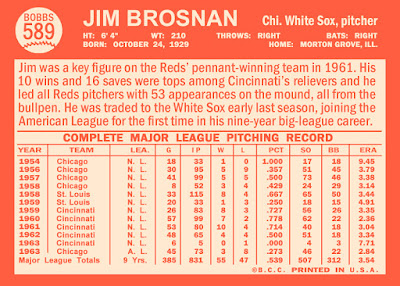