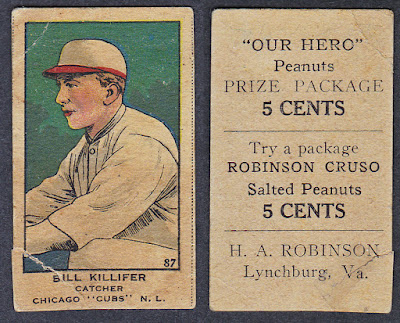 More than six years ago (Aug. 11, 2009) this blog carried news of the discovery of a previously uncataloged version of the 1920-21 strip card set known by its American Card Catalog number of W514.

Back in 2009, this type of ad-back W514 was known within the hobby in only one, or possibly two, surviving examples. The card pictured on the blog was owned by veteran W514 collector Bob Zych of New York. It pictured on front Chicago Black Sox pitcher Ed Cicotte. This card bears on its back the advertising of a Lynchburg, Va., peanut company, H.A. Robinson.

I wrote at the time, "Perhaps it is because this (heretofore) unknown back is found on a Black Sox card, but there are those in the vintage card community who are not convinced this is a legitimate, circa early-1920s, overprint.

I indicated that I was "on the fence, but leaning towards legitimate," for the following reasons . . .
"If the Robinson Cruso brand rings a bell," I continued, "it might be because the brand still exists today as Robinson Crusoe (now with an "e") Salted Home-style Virginia Peanuts, and was on the list of peanut products recalled in the salmonella scare earlier this year. The brand is now the property of Peanut Corporation of America, which is in bankruptcy and the subject of numerous pending criminal and civil investigations as a result of it being "ground zero" for the salmonella outbreak."

Then I went on to detail my own reservations, "Besides the aforementioned appearance on a "star" card that is so low-grade as to not risk losing much value if it was proven to be phony, the nagging doubt I can't quite shake is that there is a decided lack of corroborative, verifiably vintage, advertising for the two named peanut brands. A company that went to the trouble to create baseball cards to promote its product was certainly savvy enough to have used other types of promotions and premiums, yet these are not to be found by the casual researcher." 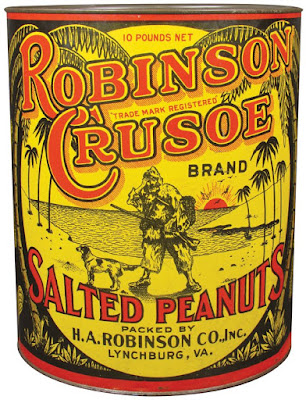 Recently, however, I was made aware of this image of an apparently vintage Crusoe-brand peanuts can by hobby buddy Mike Rothstein. He also noted that reproductions of glass counter-top jars from "Robinson Crusoe Salted Peanuts" are regularly found on eBay.

Additionally, in June, 2013, an eBay seller offered an original, unused five-cent box for "Our Hero" roasted peanuts. A side panel of the box indicates, "A Prize in Each Five Cent Package." It's certainly possible that one of the prizes could have been a baseball card.

More thorough google-searching turns up images for other Crusoe peanut packaging such as bags and other sizes/styles of cans.

A listing for H.A. Robinson ad-back W514s appeared in the 2011-dated edition of the Standard Catalog of Baseball Cards, but was inadvertently dropped when the book was downsized to its current vintage-only format.

All of the above is by way of introducing a newly reported example of an H.A. Robinson ad-back W514, card number 87, Cubs catcher Wade Killefer (misspelled Killifer on W514s).

The Killefer W514 was found among the belongings of the parents of a north Georgia woman. It was the only baseball card in the trunk. I was able to acquire the card for study, specifically a detailed study of the ad on back. I am able to now state with certainty that the advertising on back was printed before the card was placed into circulation. In my mind it proves the legitimacy of the issue.

The card also shows the expected signs of its 90+ years on this earth, though the printing -- front and back -- remains bright. There is a corner crease at top-right and, unfortunately, the bottom right corner has become separated and is now held on by a small strip of clear tape. 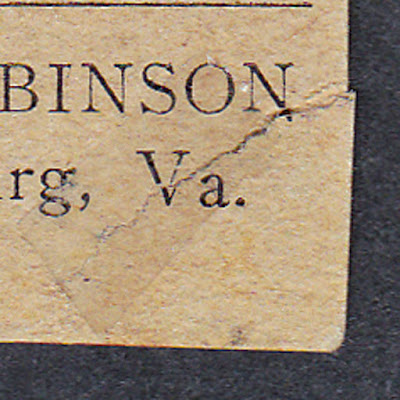 It remains to be seen whether the hobby will have to wait another six years before an additional example of an H.A. Robinson ad-back W514 surfaces.