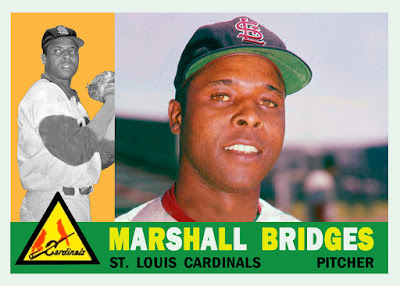 As you may have read in my posting of Nov. 17 about my custom Jim Brosnan card, I recently finished rereading Brosnan's books The Long Season and Pennant Race.

I mentioned that I enjoyed Brosnan's recounting in the latter book of some of his interactions with Reds teammate Marshall Bridges. Probably not something that an author would do today, but in his book, Brosnan quoted Bridges in black Southern dialect. Doing so made Bridges more "real" to me. Brosnan called Bridges "Fox," and Bridges called Brosnan "'Fess," short for Professor.

Bridges was also known in his playing days as "Sheriff," a takeoff of his first name. Some teammates called him "Rug," because the tales he spun in the bullpen and clubhouse of hunting and fishing in his native Mississippi and of his baseball prowess were often met with a derisive, "You lie like a rug!"

For a number of years I've wondered why Bridges had no Topps baseball cards. He spent all or parts of seven seasons, 1959-65, in the major leagues. An integral part of the Reds' 1961 pennant-winning team and the World Champion 1962 Yankees, Bridges was a left-handed relief specialist.

A veteran collector told me he was "pretty confident" that Bridges had signed an exclusive baseball card deal with Fleer, like other players who are conspicuously absent from Topps sets of the early 1960s, like Maury Wills, Chris Short and Jack Reed. While Bridges does not appear in the 66-card 1963 Fleer set, he may have been slated for a later series that never materialized due to litigation with Topps.

We do know that Topps did take photos of Bridges in spring training circa 1959-60, as a Cardinal and as a Red. I used two such photos in creating my 1960-style custom card.

Marshall Bridges got his start in Organized Baseball after impressing members of Roy Campanella’s barnstorming team of black Major Leaguers on its 1952 post-season tour on the South. The Campanella All-Stars featured a changing roster of black big leaguers, with a few minor leaguers and occasional local talent sprinkled in. They were even able to recruit Willie Mays for a game in Birmingham, while he was on furlough from the U.S. Army.

Financially successful at a time when virtually all other post-season barnstorming tours were fiscal failures, Campanella’s aggregation averaged a paid attendance of 2,500 fans for its 25-game schedule that saw the major leaguers win 21 of the games.
Bridges was a pitcher on the Negro American League All-Stars team that provided the principal competition against Campanella’s team.

The 22-year-old right-hander was a three-year veteran of the NAL’s Memphis Red Sox. When not pitching he was good-hitting outfielder.

Bridges' performance on the mound and at first base on days he didn't pitch impressed the big leaguers, and at least three of them brought Bridges to the attention of their teams.

In recommending Bridges to the Dodgers, Campanella raved about his assortment of pitches and asserted that he had the best natural curve ball he had ever faced. Campy’s batterymate Joe Black also urged Brooklyn to sign Bridges.

Bridges was also the subject of recommendations made by Campanella tourists Harry Simpson of the Indians and Monte Irvin of the Giants to their teams.

The young pitcher was assigned to the Giants’ AAA farm team at Minneapolis in the American Association, then farmed out to Sioux City, a Giants affiliate in the Class A Western League.

The Giants seemed more interested in Bridges' potential as a first baseman than as a pitcher. He appeared in only four games on the mound. In six innings he struck out eight, but walked seven and gave up nine hits. His ERA was 9.00. Playing 129 games at first base, Bridges hit .247 with six home runs.

In 1954, Bridges was dropped to Class B ball with New York's Danville team in the Carolina League. He didn't pitch at all that season, and player just 15 games at first and in the outfield, hitting just .211.

In a transaction that baseball-reference.com calls "unknown," Bridges was acquired by the Milwaukee Braves, who put him back on the mound for 1955. Starting out in the Class AA Texas League at Beaumont, he was 0-2 as a pitcher in eight appearances. As a first baseman-outfielder he hit just .111 before being demoted to Amarillo. He found Class B ball more rewarding, compiling a 14-1 record to lead the West Texas-New Mexico League with a .933 winning percentage. He struck out 177 in 139 innings, walking 97. As a 1B-OF, he batted .233 with nine home runs in 120 at-bats.

For 1956, Bridges was advanced to Class A Topeka. He again proved dominant on the mound, leading the Western League with 18 wins against 11 losses. In a league-leading 242 innings pitched, his 213 strikeouts were best in the circuit. He also led in walks (154). Again putting in some time at first base and in the outfield, Bridges batted .272.

Impressed with his 16 wins, which tied for tops in the Class AAA PCL, The St. Louis Cardinals purchased Bridges from Sacramento after the 1958 season.

Bridges opened the 1959 season with the Cards' AAA farm club at Rochester (International League). By mid-June he was 3-3 in 10 starts, with a 3.55 ERA. Needing a left-handed reliever, St. Louis called him up. He made his first major-league appearance on June 17, winning against the Phillies in a 5-inning relief effort. He ended the 1959 season with a 6-3 record out of the bullpen.

St. Louis used him principally as a late-innings reliever in 1960. He was 2-2 on Aug. 2 when the Cardinals placed him on waivers and he was picked up by Cincinnati.

The Reds used Bridges almost exclusively as a set-up man and closer.  In 14 games he compiled a 4-0 record with two saves and an ERA of just 1.09. He struck out 26 and walked just seven in 25 innings.

The following season, Bridges became part of a major league record, but not in a good way.

On June 8 the Reds were hosting the Milwaukee Braves. Cincinnati starter Jim Maloney took a 10-2 lead into the top of the 7th inning. Frank Bolling singled to open the inning. Maloney then gave up back-to-back home runs to Eddie Mathews and Hank Aaron.

Bridges was called in from the bullpen. He then gave up back-to-back home runs to Joe Adcock and Frank Thomas. The home runs to four successive batters was a new big league record. Bridges then got the next three batters out, leaving the game with the Reds’ lead cut to 10-7. Mathews homered again in the 8th, but the Reds hung on for the 10-8 win.

After just three more appearances and with an 0-1 record and inflated 7.84 ERA the Reds sent Bridges down to Jersey City in late June. In the AAA International League, Bridges was used as a starter, working to a 6-8 record.

At the 1961 winter baseball meetings, the Reds traded Bridges to the New York Yankees for catcher Jesse Gonder. As the Yankees' closer in 1962, Bridges was the ace of the bullpen with an 8-4 record and 3.14 ERA. His 18 saves were nearly more than the rest of the relief corps' combined 22.

Bridges appeared twice in the World Series as New York defeated the Giants 4-3.

In Game 4 Bridges came to the mound in the top of the 7th inning in relief of Jim Coates. The socre was tied 2-2. There were two men on, second and third, with one out. He issued an intentional walk to Bob Nieman to load the bases, then induced a pop out from Harvey Kuenn for the second out. Facing Chuck Hiller, Bridges gave up the first National League grand slam home run in World Series history. Because two of the runs scored were on Coates' account, he was saddled with the eventual 7-3 loss.

Bridges also appeared in Game 6, closing out the Yankees' 5-2 loss.

Bridges became the first Yankees casualty of 1963 when he was shot in a nightclub during spring training.

Police reported that the player was shot with a .25 automatic pistol after “some sort of argument” Feb. 13 at the Pride of Fort Lauderdale Elks, a “Negro club.” The 21-year-old female shooter, Carrie Lee Raysor, was booked on charges of aggravated assault.

Bridges was shot in the left calf, damaging muscle and breaking a bone. He didn’t require surgery, but was hospitalized for nine days. He was ready to go for the Yankees by the second week of the regular season.

His bosses downplayed the shooting in the press. Manager Ralph Houk said, “It appears he was a victim of one of those things.” GM Roy Hamey clarified, “He wasn’t drunk. It happened about 9:30 p.m., so it wasn’t after hours.”

Raysor told police she shot Bridges after the pitcher “put his arm around me and pulled me over and I didn’t like that kind of mugging.” A barmaid said Bridges was trying to kiss the woman just before the shooting.

Bridges, 31 at the time and married with three children, declined to press charges. He said he had had only one drink while waiting for a friend to go to dinner. The Yankees took no disciplinary action against Bridges.

On June 20, 1963, Bridges won in relief for the N.Y. Yankees against the Senators. He pitched 11 more times for the Yankees that year, with no decisions. In Nov., 1963, the Yankees sold Bridges to the Washington Senators.

He was 0-3 for Washington in 17 relief appearances through June 20 when he was sent down to Toronto (International League). He didn’t win again until Sept. 1, when he beat Syracuse. That was Bridges' only win in 17 games for the Maple Leafs that year.

The Senators sent Bridges to Hawaii to open the 1965 season. He was 2-0 when he was recalled to Washington for his last hurrah in the major leagues. From May 16, when he appeared in both games of a double-header, through the end of the year, Bridges was 0-2 in 40 games.

Returning to his native Jackson, Miss., Bridges died there of cancer in 1990 at the age of 59.

As mentioned earlier, Marshall Bridges did not appear on any Topps cards. In fact, I know of only two career-contemporary cards for Bridges. 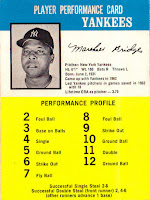 In 1958 he was one of 10 Sacramento Solons players in a black-and-white team set distributed by Union 76 gas stations. In 1964 he was included in the "Challenge the Yankees" card game set of 50.

In his post-playing days, there are two more Bridges cards. He is pictured in a Washington Senators uniform in Series 1 of the 1978 TCMA "The 1960s" collectors' issue. In 1992 he was included in the WIZ/American Express "Yankees of the 50's Card Series," part of a set that attempted to include all New York Yankees players.

There are photos extant that would have allowed me to create a 1961 Reds card, a 1962 or 1963 Yankees card or a 1964 or 1965 Senators card. There is even a great black-and-white Cardinals portrait that I contemplated turning into a 1960 Leaf custom. Ultimately the image of a 1960 Topps-style Marshall Bridges custom card spoke to me most clearly. 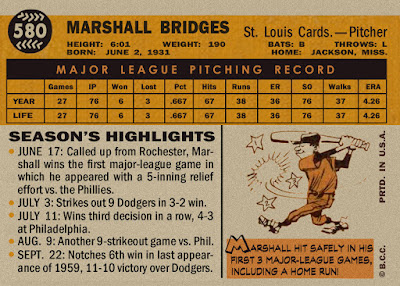