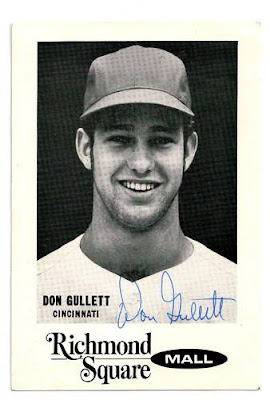 Sprinkled throughout the Standard Catalog of Baseball Cards are dozens, perhpas more than 100, of what I call "one-card sets."
These are baseball cards and collectibles that are not part of a larger issue, but rather stand alone as the only example of their type.
Quite often these cards were issued locally or regionally for a one-time event, like a player's appearance at a sponoring business to meet the public and sign autographs, or to mark a player's endorsement of a business (perhaps even his own) or a product.
Some of these special issues feature the biggest names of their era, while others picture a hometown favorite. Some are rare, some are common.
When compiling the SCBC was my (more than) full-time job, I never missed the chance to add these specialty cards to the book's data base, thus ensuring the record of their existence for future generations of collectors. Today, with only very limited time to devote to the book, these cards often take a back seat to more mainstream issues that need listing or updating.
But with a little time on my hands before college football games start for the day, I thought I'd share a couple of recently reported one-card sets with you.
From Cincinnati Reds specialty collector Mark Reed, we have a card that was most likely issued between about 1971-76 by the Richmond Square Mall in Richmond, Ind., due east of Indianapolis near the Ohio state line.
In a format similar to other cards featuring Cincinnati Reds players of the time, the Don Gullett card is printed in black-and-white on semi-gloss stock in a size of 3-3/4" x 5-1/2". It was prob 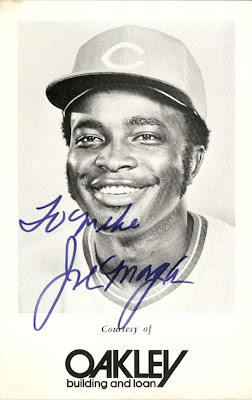 ably issued in conjunction with an autograph appearance by the Reds' pitcher at the mall. Because it appears to be contemporary with similar issues, we're going to arbitrarily assign this card a 1972 issue date for cataloging purposes.
The second single-card set was reported by another Reds' collector, Phil Hollandin, who specializes in the Big Red Machine teams.
He reliably dates it to 1974, when the person from whom he purchased the card acquired it in person at an autograph appearance by Joe Morgan at the bank northeast of Cincinnati.
The card is 3" x 5" in size, printed in black-and-white and blank-backed.
In both of these cases, it is not currently known whether these businesses also had other autograph guests for whom cards might have been issued.