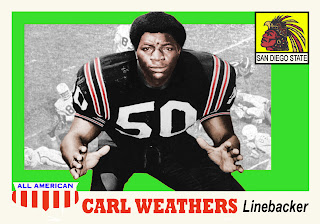 Back on Sept. 1, I did a piece about how I got into making 1955 All-American style custom cards. In that article, I mentioned the nine players that were at the top of my wish list . . . players for whom I needed good photos in their college football uniforms to work up a card.

With the help of several readers I've been able to complete four of those projects. I've completed cards of Rocky Bleier (Notre Dame), childhood friend Jim Bond (Michigan State), Frank Thomas (Auburn), and now, Carl Weathers.
And, when it rains, it pours (sorry So. California). While doing a Google image search, I not only found the San Diego State photo that I used for this card. but also found two others photos of Weathers in football uniforms that will provide the basis for a couple of other tribute cards.
I found a photo of Weathers in an Oakland Raiders uniform that will be the basis for a 1971 Topps-style NFL card, and as a member of the CFL's Vancouver B.C. Lions, with which I'll make my first Canadian-style custom card, in the format of 1972 O-Pee-Chee.
There's lots of biographical data for Weathers on the internet (though precious little detail, especially stats, of his football career), so I'll confine my comments to just the personal note that I am a great admirer of him as an actor. I like his range, whether he's playing a heavy in a mid-1970s blackploitation film, or an action hero in his later movies.
You probably know him best as the bombastic boxer Apollo Creed in Rocky, Rocky II, Rocky III and Rocky IV, between 1976-1985.
Most recently, other than a currently running Miller Lite commercial, he played Coach Trainor in the 2009 TBS comedy series Brothers. I liked his work on that series, playing the irascible father to brothers played by Michael Strahan and Daryl Mitchell. Again, I admire the range it showed as an actor.
Watch this space in the next couple of days or a week for the unveiling of my two other Carl Weathers custom football cards. 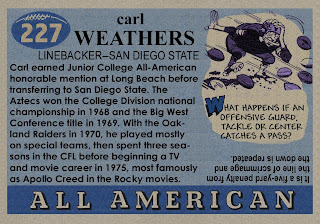 Since publication of my wish list, I've been able to get photos of actors Woody Strode (UCLA) and Johnny Mack Brown (Alabama), but haven't tackled their cards yet. That leaves me still searching for quality photos of :

If you can provide a useable photo, I'll send you three of the finished cards. You can e-mail me at scbcguy@yahoo.com.
Posted by Bob Lemke at 10:12 AM