Some "A Christmas Story" baseball/card trivia 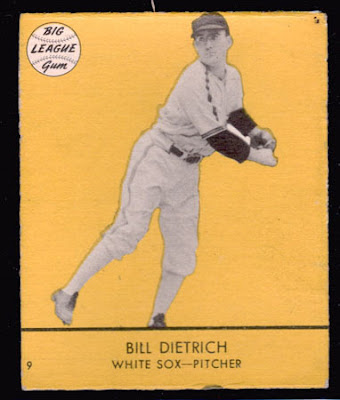 Watching the 1983 movie A Christmas Story on Christmas Day has been a family tradition for many years.
This was the first year we've watched on a big-screen high-def TV and we were all amazed at the little details we hadn't picked up on before.
One of the first "new" things I noticed, early in the movie, is that Ralphie has three baseball cards tacked to his bed's headboard. Two of them are T206s, and one appears to be a larger format card like a 1936 Goudey Wide Pen, which would certainly be in keeping with the movie's intended time frame.
There's also a scene in which "Old Man," reading the paper at the kitchen table, remarks on the Sox' trade of "Bullfrog." In poking around on the movie's trivia section on The Internet Movie Database, I read that this script comment was a likely reference to former Chicago White Sox pitcher Bill "Bullfrog" Dietrich. Dietrich pitched for the Sox from 1936-1946, though he was never traded to or from the team. He came on waivers from the Senators and was released late in the 1946 season, picked up by the A's for 1947.
Coincidentally, I don't remember seeing that scene in the TBS version of the movie that I watched the other day. It may have been cut, or I may not have been paying close enough attention.
I'm enjoying my two-week Holidays' vacation, finally having a little time to work on some custom cards and post a blog entry or two. I hope if you've had time off, you similarly enjoying it.
See you next year!
Posted by Bob Lemke at 7:47 AM