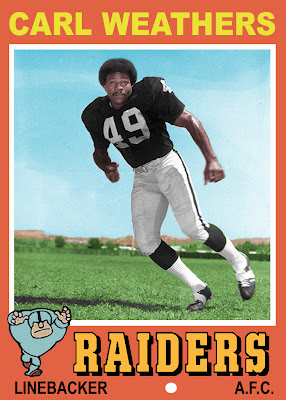 I just noticed that this will be my 101st posting for 2010. That's not as prolific as my 2009 output, which was 123 posts in just over half a year. However, with my "day job" and my work as a contributor to the Standard Catalog of Baseball Cards, there never seems to be enough time to work on my custom cards or to share the results with you here.

As I mentioned the other day, I had the good fortune recently to find three different, eminently useable, photos of Carl Weathers in his early incarnation as a college and professional football player, after years of searching.

I'm happy to present the second of what will be three different Carl Weathers football cards, for reasons that I put forth in my Dec. 28 posting. This one also represents my breaking new ground in the use of classic card designs. This is my first 1971 Topps-style football custom creation. The end result is especially gratifying because there were some unusual challenges involved in getting the card from concept to reality.

As you can see, the card started with a black-and-white photo. I'm convinced that the picture was originally the work of the Topps photographer who shot the 10 Raiders photos that appeared in the 1971 set. All photos shared the same background, the same position of the sun, and, with one exception, the format of full-length action poses.


It doesn't seem likely that a Topps photographer, or any free-lancer hoping to sell card photos to Topps, would have been shooting in b/w at that time. If, in fact, the cards started out as black-and-white pix, the Topps airbrush artists would be green with envy over the ease with which I was able to colorize the picture with the Photoshop Elements graphics program that I use.

In any case, the picture I found on the internet was in black-and-white, and besides adding the color, I had to remove the red "watermark" from across the photo. That involved a bit of, as the " . . . for Dummies" book says, wrangling of pixels, but as I've mentioned before, this is my hobby and I don't mind at all putting in the time to get a picture the way I want it.

Because there is not a rigid consistency to the colors of the player name, team, position and cartoon figure among the 1971 Raiders cards, I was able to choose those that suited by personal preference.


The back of the card was really the hard part. As mentioned in my earlier piece, while there is a lot of information on the internet about Carl Weathers, the actor, there is precious little specific detail about Carl Weathers, the football player. Actual stats are especially difficult to come by from 40 years ago. The Raiders media guide for 1971 only says that Weathers was "active for" seven games in 1970 at linebacker and on special teams; there were no actual numbers provided.

Still, I opted to include an "INTERCEPTION RECORD" stat box at the bottom of my card, even though it was all zeroes. I did so largely because the paucity of information about Weathers' college days and first year as a pro was such that I just didn't have enough information to write two or three more sentences.

As it was, I had to come up with 147 words of copy for the player biography. In contrast, for my All-American style cards, the struggle is usually to limit a summary of the player's career, or even his life, to 80-90 words. Writing "long" for this card was definitely a change for me.

Also challenging was putting those words into print. The Topps graphic artists really outdid themselves on the backs of the '71s. I had to use eight different typefaces from four font "families" to come up with a reasonable replication of the Topps original. At that, a few of the fonts are not exact matches, but if I hadn't said anything here, I doubt anybody would notice. 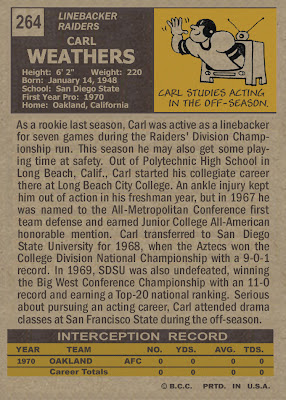 Coming up with the cartoon on back was not as difficult as you might imagine. I correctly guessed that an O.J. Simpson card might have something along those lines, and I only had to look as far as his 1970 Topps rookie card to find what I needed.

With two of my three Carl Weathers cards now complete, I'm waiting for the mail to bring me a 1972 O-Pee-Chee card to use as a template for the third card. This will be my first attempt to recreate a Canadian card, and that brings with it a special challenge. OPC football cards in those years were bilingual, English and French.

I suppose I'll probably use an internet translation site but I have some trepidation that such a program might have problems converting English football idiom into something that won't make a native French-speaker laugh.

Watch this space after the turn of the new year and we'll see.
Posted by Bob Lemke at 2:00 PM