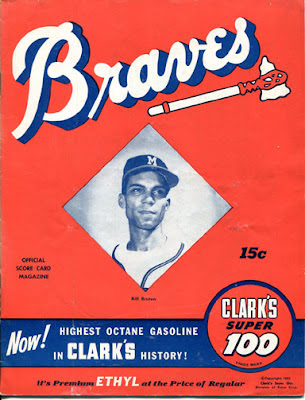 Unless you were a Milwaukee Braves fan at the time, or like myself are a serious student of the Braves of that era, you’d probably never guess who was the team’s first fan favorite.

It wasn’t future Hall of Famer Eddie Mathews, though he led the National League with 47 home runs that season. Nor was it staff ace Warren Spahn, another Hall of Famer who led the league with 23 wins and a 2.10 ERA.

No, the first player to capture the town’s attention was centerfielder Billy Bruton.

In their first game as the , rather than , Braves, the team had defeated the Reds 2-0 in the 1953 season opener at on April 13. Bruton had batted 2-for-4 with a double, but the writers said his greatest contribution was in centerfield; they estimated he took six runs away from the home team with his fielding.

The next day, against the Cardinals and Gerry Staley, the Braves played their first official game at the brand new Milwaukee County Stadium. Despite a 47-degree temperature for the home opener, attendance was 34,357 – a larger draw than any series the team had played at in 1952. There was no TV coverage for the opener and one wrtier described downtown as deserted at gametime.

After flying out to left in the first and popping up in the infield in the third, Bruton led off the sixth inning with a single. In the bottom of the eighth, with two out. Bruton tripled. He scored on Sid Gordon’s single to break a 1-1 tie.

The Cardinals answered with one in the top of the ninth, but in the bottom of the 10th, Bruton hit a walk-off home run – a storybook ending to the Milwaukee Braves first official home game.

In the team’s first two games, Bruton had five of the Braves’ 15 hits, three of their five runs and the team’s only stolen base.

Wet, cold weather forced cancellation of the rest of the home series with . The Braves returned to on April 17 and Bruton continued to be hot. The Braves lost 10-9, but Bruton was 3-for-5, raising his batting average to .571.

Bruton went on to get at least one hit in each of the Braves first seven games of 1953
and he was batting .424.

He cooled off considerably as the year progressed. By the end of the season his BA was .250, the lowest total over the course of his .273 career spanning 12 years.

I may be incorrect in this, but I believe that Billy Bruton was the first player to be honored on the cover of the Milwaukee Braves program.

If I’m not mistaken, the team’s first cover, prepared for its exhibition games against the Boston Red Sox, had a picture of at center. For the official season, manager Charlie Grimm, who had managed the Milwaukee Brewers of the American Association 1941-44 and 1951-52, initially had the place of honor on the program’s cover.

I believe that Bruton then became the cover boy on the basis of his torrid play in the first week of the season. He appeared on the program cover for homestands later in the season, as well, rotating with such other Braves stars as Eddie Mathews, Joe Adcock, etc.

was predisposed to get behind Bruton as their first big league hero, as 1953 was actually his second season playing there. He had spent the 1952 season there with the Brewers, batting .325 and stealing 30 bases in dilapidated old Borchert Field.

Early in the 1953, amid a host of “days” and “nights” for most of the team’s regulars, the fans had given Bruton a television and an apartment full of furniture.

Though his hitting had leveled off by the last month of the season, a formal “Billy Bruton Day” was held on Sept. 13. On that occasion he was presented with a $5,500 down payment on a new house. He also received a watch, a suit, golf clubs and two $1,000 savings bonds. His wife was presented with diamond earrings.


I don't guess I'll find another excuse to share this vignette of Billy Bruton, so I'm going to append it here. It reflects a time when the Boston Braves, with whom Bruton went to spring training in Florida in 1952, had to find alternative accommodation for their black players, who were not welcome in the team hotel in Bradenton.


From April 2, 1952, Sporting News, “Harold Kaese, writing in the Boston Globe from Bradenton, Fla., reported, ‘Sam Jethroe, George Crowe and Bill Bruton live at Mrs. Gibson’s boarding house here. As rookies, Crowe and Bruton arrived several days before Jethroe. Bruton requested that grace be said before meals. This was all right with Mrs. Gibson. Then Sam arrived. When his first meal was ready he plunged right into Mrs. Gibson’s good victuals, as usual, giving the impression that the pork chops were base hits. ‘Just a minute, Sam,’ admonished Mrs. Gibson. ‘We have some new rules since Mr. Bruton joined us. We are asking a blessing on our meals.’ Sam dropped his fork and stood up respectfully with the rest of them while Mr. Bruton said grace.”
Posted by Bob Lemke at 2:53 PM