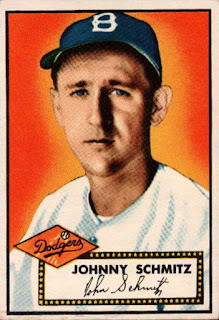 
Burnes was referring to Schmitz having been dealt away from both pennant-winning teams that year and presumably missing out on World Series bonus money.


Schmitz had been traded from the perennially second division Cubs in mid-1951 to the always-contending Brooklyn Dodgers.


Schmitz began the 1952 season with Brooklyn, who won the National League pennant. After going 1-1 for the Dodgers, Schmitz was put on waivers on Aug. 1.


By what must have seemed like a stroke of good luck, Schmitz was picked up by the N.Y. Yankees, who were in first place in the American League at the time and were the eventual World Champions.


After less than a month, the Yanks traded Schmitz to the seventh place Cincinnati Reds. He left the Yankees with a 1-1 record on Aug. 28.


The Reds finished the 1952 season in sixth place, out of the running for post-season bonus pay. 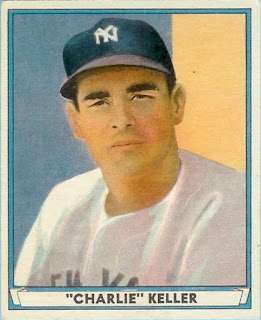 A full World Series share for the Yankees in 1952 totaled just over $6,000, which probably represent most of a year's salary for Schmitz at that time. The N.L. Champion Dodgers set a full share of their cut of World Series proceeds at $4,200.


As it turned out, though, Schmitz was not forgotten in divying up what the Sporting News of the day liked to term, the "melon." While the Dodgers stiffed him, the Yankees voted Schmitz a one-fourth share, amounting to $1,496.66.


Schmitz was not the only recipient of Yankees' largesse with their post-season split. Charlie Keller, a long-time Yankees slugging star who had spent the 1950-51 seasons in exile with the Detroit Tigers, returned to the Yankees as a free agent on Sept. 5, 1952. In his three weeks on the roster, he struck out in his only at-bat. Probably more in gratitude for his earlier years of service in pinstripes, Keller was voted a $1,000 share of the World Series pool.