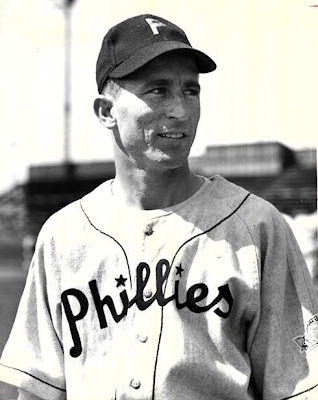 One of Elvis Presley’s bodyguards circa 1960 was a former major league ballplayer.
That’s according to sports writer Ed O’Neil (no, not Ed O’Neill the former football player/AlBundy/Jay Pritchett).
Writing in his “Breezes From Press Box / Picked Up by Bended Ear,” column in the July 6, 1960, Sporting News, O’Neil revealed,
“Elvis Presley’s bodyguard is a fellow with a brief major league background.
“Bitsy Mott, paid as a ‘security’ man by Presley, is the same Elisha Matthew Mott who played in 90 games and hit .221 for the 1945 Philadelphia Phillies, playing second, third and shortstop.
“Mott was a special deputy on the Tampa, Fla., sheriff’s staff before going with Elvis into teen-age combat. In Presley’s G.I. Blues movie, Mott plays a sergeant, tongue-lashing Elvis. He uses the oratorical style he acquired while debating heatedly with umpires.”
In 1961, Mott appeared, again uncredited, as a state trooper in the Elvis Presley movie, Wild in the Country.
Mott, whose nickname came from his 5’ 8”, 155-lb. frame, got the Presley gig because his sister married Elvis’ agent, Col. Tom Parker.
Mott’s pro career began in 1939 and ended in 1957. He played all over the , mostly in lower-classification leagues in the Southeast. He never played higher than a single game of Class AA ball, with of the Southern Association. He was the prototypical “good field, no hit” infielder, batting around .255 for his career.
As far as I know, Mott never appeared on a baseball card.
Posted by Bob Lemke at 11:24 AM