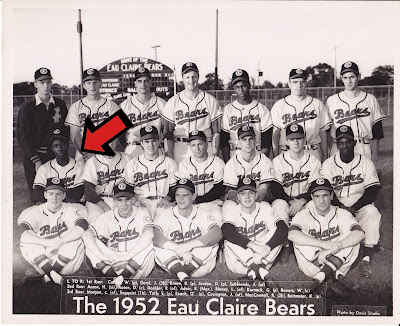 I don’t know if this is actually the first time Henry Aaron was mentioned in a national sports publication, but the earliest such mention that I can recall seeing was this item in the June 18, 1952, issue of The Sporting News.

“The Clowns, who added to their lead in the Negro American League by splitting four games while the Kansas City Monarchs were dropping three, sold Henry Aaron, 17-year-old rookie shortstop, to the Boston Braves, who are to assign him to a farm club. Aaron was slugging the ball at a .427 pace, led the league in doubles with seven, and in homers with eight. He also was the top man for runs batted in with 26.”

The two “potential stars” that the Clowns signed to replace Aaron were Tom Cooper, “a former student at West Virginia State College, and Herbert Benson, a first baseman.”

On the morning of June 9 that season, the Clowns had played to a 17-8 record to lead the NAL.

This early mention of Henry Aaron reminded me that I have squirreled away in my “archives” what I now realize may be the first collectible item ever issued of Aaron . . . at least the first while he was in Organized Baseball. 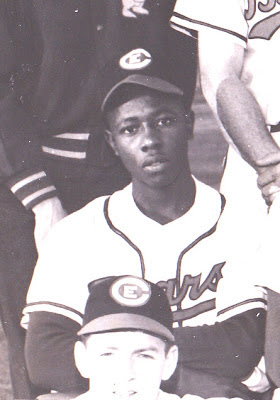 It is an 8” x 10” black-and-white team-issued glossy photo of the 1952 Eau Claire Bears.
Aaron is shown seated at the left end of middle row. The Bears were a Boston Braves farm team and Aaron’s first club in Organized Baseball.

Three other future Major Leaguers are shown in the team photo – two of them managers. Aaron’s future outfield teammate Wes Covington is pictured in the back row, third from right. Also in the photo are Bears manager Bill Adair, who had a 10-game stint as manager of the Chicago White Sox, and Johnny Goryl, who played for the Cubs 1957-59 and the Twins 1962-64, managing the Twins in 1980-81.

The 1952 Eau Claire Bears finished third in the Class C Northern League in 1952. Aaron led the team (and was third in the league) with a .336 batting average. His nine home runs in 87 games were only fourth best on the team ( led with 24).

Aaron is pictured on an earlier postcard of the Indianapolis Clowns, predating his career in Organized Baseball.

Eau Claire baseball historian Jason Christopherson was able to add a couple of tidbits about some of Aaron's '52 Bears teammates.

He wrote, "Back row, far left is Charles "Chet" Morgan Jr., son of Chet Morgan Sr., an outfielder briefly with the Tigers in the 1930s.
"And in the second row, third from the left, is Chuck Doehler, who just passed away a month or so ago. Though he never made it far professionally (he was a late-season fill in for the injured "John" Covington in 1952) as a player, Doehler has one of the most unique baseball connections you could ever imagine. Chuck was one of the last to see the earthly remains of Babe Ruth (long story, but Claire had the casket re-opened so that Chuck and his late-arriving Babe Ruth League teammates could place a ball with Babe), and one of the first to welcome the new HR King, Henry Aaron.
Posted by Bob Lemke at 1:27 PM