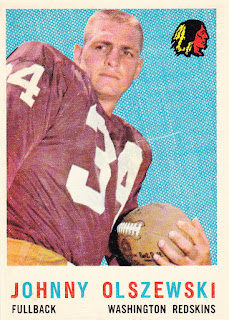 Considering the stereotypical propensity of high school and jocks to hang out together and exhibit daredevil behavior it is probably not all that unbelievable that former pro fullback Johnny Olszewski was credited with saving the lives of two contemporary quarterbacks while he was in college.

During the summer months, Olszewski was a life guard at Corona Del-Mar. Sportswriter Bob McKinney in 1951 described the beach as a place “where the clear waters of the cove invite swimming, but the rip-tides often prove disastrous.”

McKinney wrote in the Nov. 14, 1951, issue of The Sporting News, “Shortly before the start of the 1950 season, (Loyola Marymount quarterback and future Baltimore Colts executive) Don Klosterman was caught in the sucking currents and was being carried under when Johnny spotted him and brought him to shore.”

“I couldn’t swim and shouldn’t have been out there,” Klosterman was quoted.

The previous year, according to Klosterman, in nearly the same spot, Olszewski had similarly rescued first-string quarterback Billy Mais.

Mais had been a teammate of Olszewski’s at St. Anthony’s High School in ; Klosterman and Olszewski were described as ‘boyhood pals” growing up in .