A special dog for Joe Tipton 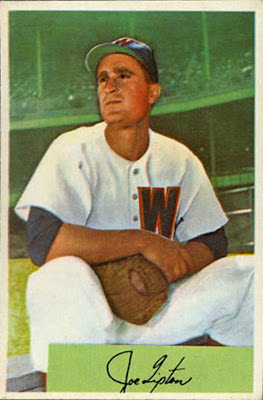 I’ve always had a soft spot for ballplayers who were dog fanciers. Now I can add former American League catcher Joe Tipton to that list.

Rather than try to summarize, I’m just going to reprint what Buss Walker wrote in the Dec. 19, 1951 issue of TSN.

Home Folks Shower Tipton;
Gift bird Dog Big Surprise
—Joe Tipton has a new bird dog. The catcher for the Philadelphia Athletics also has a lot of new house furnishings, not to mention a touch of writer’s cramp.
It all came through the thoughtfulness of Joe’s fellow citizens of the twin cities of the copper basin—, , and
Folks over here in the basin are redhot baseball fans, and they’re right proud of their major league catcher. So, when it was learned that Joe would be coming home last week from , where he’d barnstormed with Lefty O’Doul’s club, someone suggested that the home folks have a homecoming day for him.
Men behind the move were Ernest Adams, Rev. W. H. Heard, Publisher Frank Middleton and the mayors of the twin cities, Millard Cline of McCaysville and W.P. Perry of Copperhill. The entire community turned in and did its part.
Space limited tickets to the banquet to 165. They were sold out almost before they were put on sale, and donations for gifts rolled in. A fan with a hobby turned out 165 eight-inch bats on his small lathe, for favors. Publisher Middleton did himself proud on special menus for place cards. And Joe got writer’s cramp autographing both the bats and the menus for the guests.
The dinner and the reception were held at . Gifts included just about everything that a young couple could use in furnishing a new cottage—living room suite, dining room suite, cabinet, electric water heater, lamps galore and no end of personal gifts, including golden twin keys to the twin cities, presented jointly by the two mayors.
Then came the big gift for Joe, a gift that left him almost speechless. Joe had been hunting in with a Llewellin Setter named Ike, borrowed from a friend over there. Joe had become attached to the dog and for three years had been trying to buy it, but the owner had refused to even consider his top offer of $300 for the dog.
The committee decided to try to buy Ike. They made the trip to , explained to the dog owner, who agreed to sell for the $300 he’d formerly refused. The owner then turned $50 of the amount back to go toward others gifts for Joe.
The big gift was kept a secret until the last minute, when Ike was led down the auditorium aisle by two tiny McCaysville majorettes, up on the stage and the leash placed in Joe’s hand.
When Joe saw the setter being brought down the aisle, his mouth dropped open and his face began to shine. With the leash in his hand, he dropped to a knee, placed an arm around the dog’s neck and hugged him right in front of the full house. But when, a moment later, he tried to say a word of thanks, the big palooka choked up and could hardly get out a word.

Back in 1951, a $300 dog was no small gift. According to standard calculations of relative worth of the dollar, that $300 in 1951 would be about $2,500 today. Another way of looking at it was that $300 was probably about a week’s salary for a major league ballplayer of Tipton’s caliber.

In the mainstream baseball card issue of his day, Tipton was almost strictly a Bowman man, appearing in Bowman's 1949-51 and 1953-54 issues. In 1952 he jumped to Topps for a single year.

I like to think that Joe and Ike are now roaming the fields of the Happy Hunting Grounds.
Posted by Bob Lemke at 11:12 AM