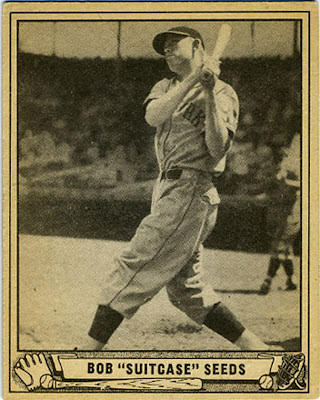 Because of its proximity to New York City, Newark, N.J. has had an up-and-down history in professional baseball. The city’s teams generally operated in the upper levels of the minor league classification system between 1884-1949, when the city last had a team in Organized Baseball. For one season, even fielded a major league team, in the 1915 Federal League.

What must surely be the greatest two-game performance by any player was recorded May 6-7, 1938, when the International League-leading Bears were playing the Bisons in .

In six trips to the plate on Friday, May 6, center fielder “Suitcase” Bob Seeds hit four home runs and a pair of singles. The homers came in four consecutive at-bats in the fourth, fifth, sixth and seventh innings; the bingles were both hit in the eighth inning as Newark beat Buffalo 22-9. He had 12 RBIs on the day. One of his home runs came with the bases loaded, there was one man on for each of his other three homers and he drove in one run on each of his singles.

He became the fifth IL player to hit four home runs in a game. At that point in major league history, four players had tied for that record. His 12 RBIs set a new league record. The major league record for RBIs in a game was 12 (Jim Bottomley, 1924). Seeds’ 18 total bases and six hits in a game also tied International League marks.

The next day, Seeds homered in his first two trips to the plate, in the first and third innings, to start his day. He walked in the fifth and then hit another home run in the sixth inning. The Bisons finally got him out when he struck out in the ninth inning. Newark won again that day, 14-8.

His two-day power surge had netted him 30 bases and 17 RBIs.

Due to rainouts and cold weather, didn’t play again until May 11; Seeds was 2-for-5 that day, with a triple.

Seeds had never previously stood out as a power hitter. In his previous pro seasons, he had averaged little more than six home runs per season.

In 59 games with in 1938, he had 28 home runs and 95 RBIs. There’s no telling how many International League records he might have broken if he had remained with all season. 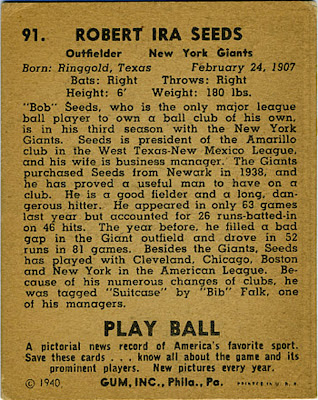 As noted on the back of his 1939 and 1940 Play Ball baseball cards, Bob Seeds had another claim to baseball fame . . . he was the only major leaguer to ever own a minor league ballclub while he played in the big leagues.

In 1939, after 10 years out of Organized Baseball, the Amarillo Gold Sox joined the Class C West Texas-New Mexico League. Bob Seeds was the owner and team president, his wife was the business manager.

Considered one of the finest athletes ever to come out of West Texas, Seeds had played pro ball at in 1928, when the team was in the Class A Western League.

Contemporary with his ownership of the Gold Sox, Seeds owned a hardware and sporting goods store in , and later operated a large hog farm. He died in 1993.

Because he was a limited-use player for most of his major league career, Bob Seeds didn’t appear on many baseball cards. His two most mainstream issues are 1939 and 1940 Play Ball.
Posted by Bob Lemke at 1:43 PM