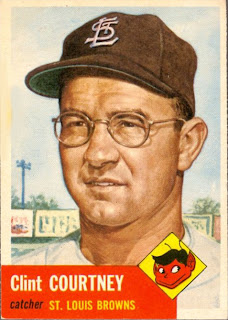 A by-lined column on the editorial page of the Oct. 8, 1952, issue of The Sporting News appeared under the headline, “Rookie Crop Far Below Par,” with the subhead, ”Courtney Pick Rip-Off of General Lack of Talent.”
In the column, Ed McAuley of the Cleveland News decried the selection of St. Louis Browns catcher Clint Courtney as The Sporting News’ American League Rookie of the Year. Courtney was the first catcher in either league to win the rookie award since it was established by TSN in 1946.
McAuley called the selection, “dramatic evidence that the freshman class of 1952 was the least talented since World War II.”
He strengthened his case by noting that Courtney’s only real competition for the A.L. honor was Red Sox catcher Sammy White.
“With all due respect to these energetic marksmen,” McAuley wrote, “I submit that there is nothing in their records which would have gained them this distinction if the rest of the new talent in the league had been up to par.”
In 1952 Courtney became the primary catcher for the St. Louis Browns. After just one game with the N.Y. Yankees in 1951, he had been traded to in the off-season.
With the Brownies in 1952, Courtney batted .286 with five home runs and 50 RBIs. He had led major league catchers with a .996 fielding average.
The Sporting News Rookie of the Year in the National League was Brooklyn Dodgers relief pitcher Joe Black.
The Baseball Writers Association of American chose as its Rookie of the Year Philadelphia A’s pitcher Harry Byrd, who had a 15-15 season. Courtney was second-place in the writers’ voting.
Posted by Bob Lemke at 1:48 PM