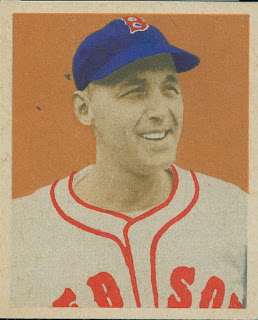 In the last entry, I presented the story of a prank phone call that failed to put its intended victim off his game.

Here’s a similar episode that DID work, preventing a player from participating in a game.

I really can’t embellish the story, so I’ll present it as is appeared in the May 10, 1950, Sporting News.

By John B. Old

LOS ANGELES, Calif.—Police launched a widespread of a mysterious phone call to Wrigley Field, April 30, which resulted in Los Angeles Outfielder Stan Spence “sitting out” the second game of the Hollywood double-header.
Both President Don Stewart of the Angels and Clarence Rowland, president of the Coast League, branded the incident as a hoax. Police, however, continued the probe on the possibility some gambler may have called Spence by way of “getting back” at the club for having ejected a nationally known bookmaker the day before.
An emergency call, supposedly from Spence’s home town in , came to the second floor office at Wrigley Field a few minutes before the second game was to start. “It was Doctor So-and-So calling,” the “operator” said.
The message was rushed to Spence. The Angel outfielder had fears something had happened to wife and children as he raced from the clubhouse to answer the call.
“Now close your eyes and concentrate,” began the caller when Spence reached the phone. Believing the call was from a medico in , Stan all but passed out. He clutched the telephone with trembling fingers. He feared the next words the “doctor” would utter.
“Concentrate,” said the “doctor” in a low drone. “You are going to get two hits in the second game . . . concentrate . . . you are going to get two hits—and if you do, I will give you FIVE HUNDRED DOLLARS!”
“Who the hell are you and where are you talking from?” thundered Spence. The man said he was a doctor in .
Spence rushed back to the dugout and found the game had already started. Having once been in the official lineup and taken out, he could not get back into the game. The man who was out there in his place was Cece Garriott . . . of !
To prevent recurrence of similar incidents, Stewart announced that henceforth no calls—regardless of their nature—would be relayed to players while the teams were on the field.
Police later learned the Spence call had been placed from a pay station at , suburb and haven of gamblers who are attracted to the city’s legalized poker palaces.
According to police investigating, known bookmakers frequent the city and baseball action is reported as “lively.” The nationally known bookmaker, object of numerous police investigations, has allegedly extended his operations over a widespread area in . 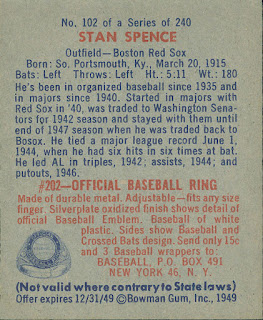 With his bodyguard, he came to Wrigley Field, April 29, occupying box seats near Stewart.
“H was just minding his own business,” commented Stewart. But when a questionable character dropped by to pay his respects, Stewart inquired his identity from a house officer seated at his side.
“Oh, that guy,” replied the officer. “Used to be a pickpocket but he’s reformed now—he’s a bookmaker!”
During the seventh inning several men sidled into the box of the nationally known bookmaker. They were city plainclothesmen. Exit the big bookmaker and his “gorilla”—quietly and unescorted.
“We only told them some fans might be apprehensive of their presence. They readily agreed they didn't want to cause any trouble and left peacefully,” the officers later explained.

Even with Spence out of the lineup, the Angels beat the Stars 3-1.

His only mainstream baseball card is in the 1949 Bowman set.

A woman claiming to be calling from a St. Louis hospital tried to get through to manager Zack Taylor during a game, wanting him to relay to Sievers that his wife had suffered a heart attack and that the player needed to rush to her bedside.

The Browns' traveling secretary took the call and sniffed out the scam, since the hospital the caller named did not exist and the phone number he requested for confirmation proved phony, as well.

The team kept the attempt under wraps for several weeks while trying to find the culprit.