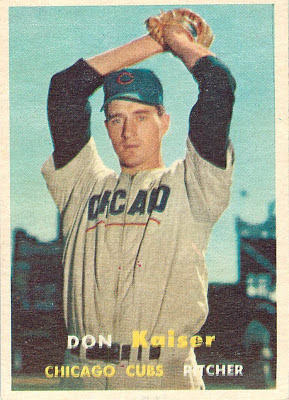 On April 21, 1957, Cubs pitcher Don Kaiser was scheduled to start against the Cardinals at Busch Stadium. It was his first game of the season and the opener of a Sunday doubleheader.

Just before game time, a telegram addressed to Kaiser was received in the press box.

Because the telegram was datelined Brooklyn and Kaiser was from , Ed Prell, a Chicago Tribune writer who delivered the message to the dugout, suggested to Kaiser that it was a phony.

After reading the wire, Kaiser agreed, saying, “My mom died on my last birthday.”

Kaiser started as scheduled, but left the game after pitching eight innings with no decision. The Cubs won the game 5-3.