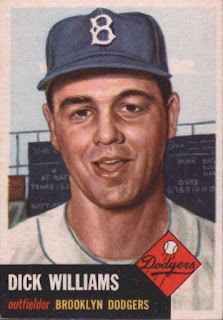 Between the 1949 and 1950 seasons, The Jackie Robinson Story was filmed in Hollywood. The movie starred Robinson himself and was rife with professional ballplayers as supporting cast and extras.

Brooklyn Dodgers' farmhand Dick Williams was one of those extras, picking up $25 a day for his efforts to add realism to the biopic. That was more per day than he'd made with the Dodgers' club at Fort Worth club that season.

I've never seen the movie. As much of a fan as I am of baseball in the 1950s, I've never been on the Jackie Robinson bandwagon.

Next time it's on late night TV, though, I may have to record it to watch a scene involving Dick Williams.

According to a short item in The Sporting News just prior to the 1950 season, Williams did double duty in one scene.

He began the sequence as a Jersey City pitcher, with Montreal player Robinson at bat and being booed by the crowd. Jackie hits a home run to silence the crowd and as he trots around the bases, he passes Williams . . . playing the second baseman.


Early reports from theaters around the country indicated that The Jackie Robinson Story was pretty much a bomb at the box office.

Brooklyn entertainment writer Ben Gould reported in a July article in TSN that the movie's run at Brooklyn's Fox Theater was cut short after just one week. 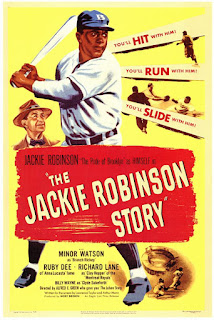 The movie had opened in Manhattan for a four-week engagement at the Astor Theater. Gross ticket sales there were around $35,000, less than $9,000 a week.

While conceding that the New York run may have slaked some of the demand in Brooklyn, Gould termed the movie's one-week receipts of $18,000 in Brooklyn as "weak," saying that it had been expected would do "at least" $50,000 a week for its two-week engagement.

Gould reported that the movie also flopped in Boston, Buffalo, Baltimore and Washington, D.C., and did "just fair" in Cleveland, Cincinnati and Pittsburgh.

Conversely, the Robinson movie "broke all attendance records" in Canada (where Robinson had gotten his start in Organized Baseball with Montreal in 1946) and California (where he had been a football star at UCLA). Standing room only lines were reported in Detroit and Chicago.