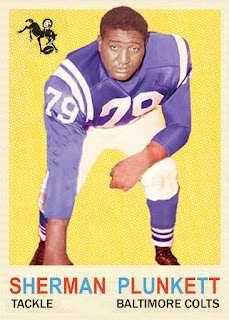 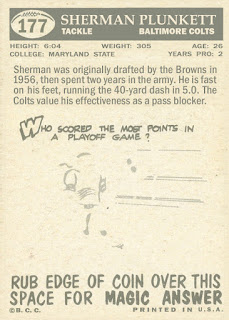 You've seen here in the past week or so that I've been winding up my football custom card creation "season" with a few of my favorite players from the 1968 Jets.

Even if he wasn't part of the World Champion team, I always liked Sherman Plunkett.

Plunkett was drafted by the Cleveland Browns in 1956 . . . then drafted by the U.S. Army. He spent his military days at Ft. Dix, in New Jersey, playing on the camp football team and learning the ropes from such NFL veterans as Rosey Grier.

The Colts signed him as a free agent after he was released by Uncle Sam.

Perhaps Plunkett's greatest contribution to the history of pro ball was that it was he who gave Joe Namath the nickname "Broadway Joe," after seeing Namath on the cover of the July 19, 1965, issue of Sports Illustrated.

At the time he debuted in the NFL with the Baltimore Colts in 1958 he was the biggest man in the league. Reports of his playing weight varied all over the scale from 290-330. For my card, I chose 305 as likely the most accurate in his early seasons.

While Topps had photos of Plunkett from his 1968 rookie season with the Colts, he didn't get a football card  from them until 1965. And his 1966 Topps card was his last.

I can't prove it by the photos that Topps sold recently on eBay, but I believe his 1965 rookie card was actually from the 1958 photo session, and the 1966 card definitely was an eight-year old photo.