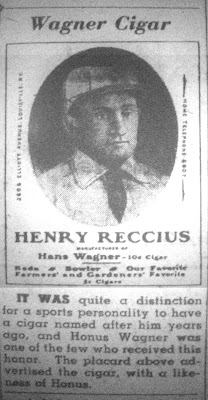 As I was nearing the close of 1950 in my reading of microfilms of The Sporting News, I was surprised to find a familiar image on Page 18 of the Dec. 6 issue.

Imbedded in the third installment of the paper’s serialized baseball biography of Honus Wagner was a picture of the Henry Reccius cigar card that stirred up so much interest and a bit of controversy in the hobby more than a decade ago.

Produced by a cigar manufacturer, the black-on-orange 3-3/8” x 4-11/16” card has a portrait photo of Wagner in what is presumed to be a uniform dating from the years (1897-99) he played there. On back is a poem extolling trade unions.

What made the card such a big hobby deal is that it was touted as Honus Wagner’s “rookie card.” With no indication of when the Reccius card was distributed – some suggested it may have even been years after Wagner’s played for – owners of the two known examples claimed the card predated what had generally been accepted as Wagner’s first baseball “card” appearance, in the 1898-1899 National Copper Plate series of 10” x 13” baseball player portraits. Those portraits, and additions to the series, were reissued in a slightly different format by The Sporting News in 1899-1900. These are classified within the hobby as M101-1 supplements.

Among the loose talk by nay-sayers after the discovery of the Reccius card, some even suggested that it was not vintage at all, but a recent fabrication. I guess the appearance of the card in TSN in 1950 lays that theory to rest.

Also in that issue of TSN was a chart of how Wagner performed against the All-Time Great pitchers of his era. I think that chart is worth reproducing in modified form here.